InvivoGen offers a collection of biological tools to assess two key functions of the SARS-CoV-2 Spike protein: infection of target cells and cell fusion. Depending on your needs, you may choose among families of:

Below are the data obtained with target cells exposed to Spike from the Wuhan original strain as well as from two variants of concern (VOCs), Delta and Omicron, which have been reported to differ in their infection and pathogenic capabilities.

InvivoGen has developed a series of target cells expressing high levels of the host receptor ACE2 alone, or in combination with the host protease TMPRSS2 at their cell surface. Thus, these cells are permissive to infection by SARS-CoV-2 and Spike-pseudotyped lentiviral particles (Figure 1). Moreover, they allow cell fusion and formation of syncytia (Figure 2), illustrating one major SARS-COV-2 cytopathic effect.

InvivoGen offers a collection of pLV-Spike plasmids specifically designed for pseudotyping lentiviral particles with the full-length SARS-CoV-2 Spike protein from various variants.  This family encompasses the first identified SARS-CoV-2 (Wuhan) and major variants that rapidly arose during the pandemic progression. Spike-mediated cell infection has been tested in-house using pLV-Spike plasmids for the Wuhan, Delta and Omicron variants together with ACE2(-TMPRSS2)-expressing HEK293-derived cells as permissive cells (Figure 1).

Depending on your needs, you may choose from "fusogenic" cells either transiently or stably transfected with a gene encoding the SARS-CoV-2 Spike protein:

- To screen for antibodies or small molecules inhibiting cell fusion, MyD88-expressing HEK293 cells with stable Spike expression can be used as these have been selected on their fusogenic potency.  "Donor" cells with stable expression of the Wuhan (original), Delta, or Omicron Spike have been functionally tested in a cell-fusion inhibition assay using the small molecule EK1C4 (Figure 4). 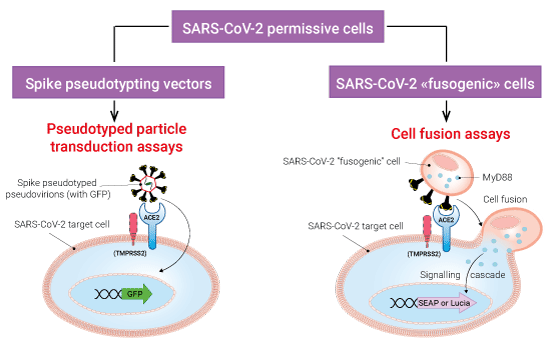 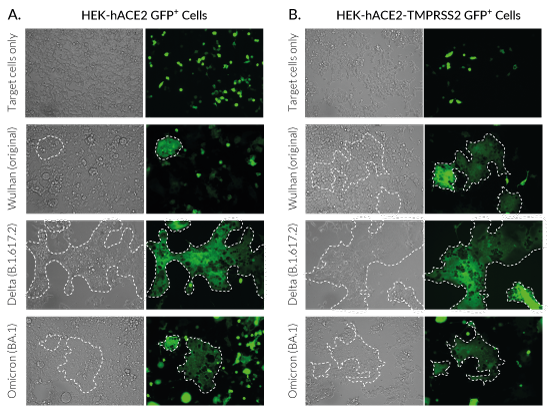 EK1C4 inhibits Spike-induced cellular fusion in SARS-CoV-2 reporter target cells. 1 x 104 HEK-Blue™ hACE2-TMPRSS2 cells (A), or HEK-Lucia™ hACE2-TMPRSS2 cells (B) were cultured with 2 x 104  293-hMyD88-S (Wuhan), 293-hMyD88-S-V8 (Delta), or 293-hMyD88-S-V11 (Omicron BA.1) "donor" cells in the presence of increasing concentrations of EK1C4.  After overnight incubation, the cellular fusion was assessed by measuring the activity of SEAP and Lucia™ luciferase reporter activity in the supernatant using QUANTI-Blue™ Solution and QUANTI-Luc™ detection reagents, respectively. Data are shown as a percentage of maximal inhibition of cell-cell fusion.