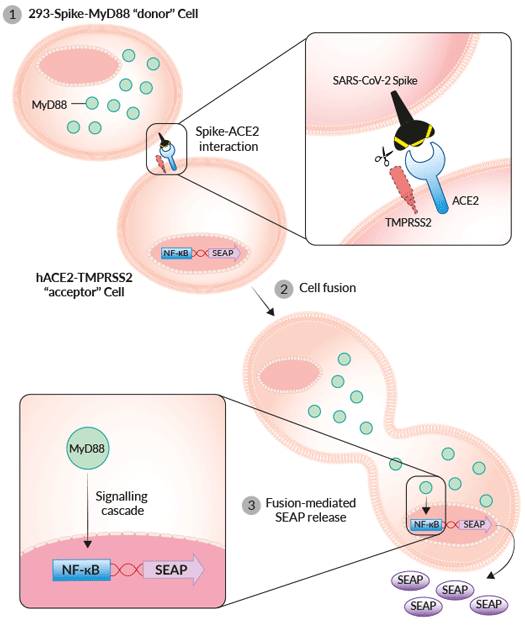 InvivoGen has developed a simple assay to study Spike-ACE2-dependent cell fusion. Specifically, the assay relies on the transfer of the adaptor molecule, MyD88, from a “donor cell line” to an “acceptor cell line” expressing an NF-kB -SEAP inducible reporter gene. Cell fusion is then readily assessable in the co‑culture supernatant using the SEAP detection reagent, QUANTI‑Blue Solution™.

293-hMyD88-Spike "donor" cells are generated following transient or stable transfection of the 293‑hMyD88 cell line with an optimized expression plasmid featuring one of the Spike variants (e.g. UK B.1.1.7, South Africa B.1.351 etc.).

InvivoGen has engineered HEK293- and A549-derived reporter cells, HEK-Blue™ and A549-Dual™, to stably express the SARS‑CoV‑2 receptors, ACE2 and TMPRSS2, making them permissive to infection. Upon co‑culture of the 293‑hMyD88-Spike “donor” cells with these “acceptor” cells, the Spike will bind to ACE2 and be proteolytically cleaved by TMPRSS2. Ultimately, these events lead to cell fusion.

InvivoGen’s “acceptor cells” have been engineered to express an NF-kB-dependent SEAP reporter. Thus, upon cell fusion, the overexpressed MyD88 in the “donor” cell will activate a signalling cascade in the “acceptor” cell that leads to NF-кB-dependent SEAP production. SEAP is readily assessed in the co‑culture supernatant using the SEAP detection reagent, QUANTI‑Blue™ Solution.

Application of our cell fusion assay

The increasing number of SARS-CoV-2 variants are characterized by several mutations of concern within the antigenic Spike protein. These mutations provide a selective advantage to the virus, having been shown to aid in viral escape from the immune system, which ultimately makes vaccine and therapeutic strategies less effective. Therefore, it is imperative to develop novel approaches to inhibit SARS‑CoV‑2 entry into target cells. InvivoGen’s cell fusion assay has been specifically designed to allow you to study the efficacy of the vaccine and antibody treatments against the emerging variants and to screen inhibitors of the SARS-CoV-2 Spike-dependent cell fusion.