Regulated cell death (RCD) plays an essential role in cell homeostasis, tissue remodeling, and diseases. In contrast to accidental cell death (ACD), a biologically uncontrolled process, RCD relies on dedicated molecular machinery. Its function is the elimination of unwanted cells during physiological conditions such as embryonal development (in these conditions RCD is known as "programmed" cell death) or pathological conditions such as infection. Besides classical apoptosis, several different forms of RCD have now been recognized, the best-studied being necroptosis and pyroptosis. They mainly differ in duration, morphological aspects, and inflammatory outcomes. Their molecular mechanisms are highly complex and intertwined and there is increasing evidence of their implication in a plethora of pathologies. The roles of RCD in human diseases are emerging as an exciting research focus. 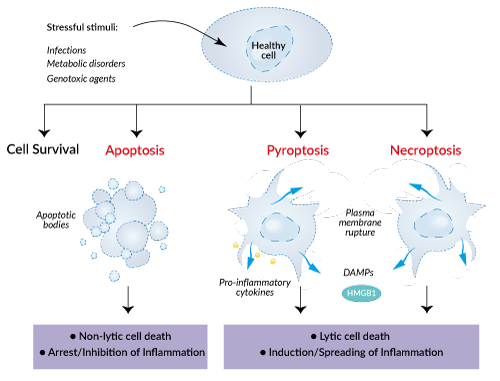 Apoptosis is the best characterized RCD to date and was long thought to be the only one. It is induced homeostatically (e.g. during embryonic development) or upon exposure to a variety of perturbations. Two primary apoptosis pathways exist, the intrinsic and extrinsic pathways. The intrinsic pathway is engaged by a variety of intracellular signals and leads to the activation of Caspase-9. In contrast, the extrinsic pathway is initiated by extracellular perturbations, through death receptors, and induces the activation of Caspase-8. Apoptotic cell death is characterized by DNA fragmentation, membrane blebbing, and the formation of apoptotic bodies. Dead cells are swiftly removed by phagocytes without triggering an immune response, thereby preserving homeostatic integrity. Apoptosis is thus considered a "silent" form of cell death.

Necroptosis is a form of RCD initiated by extracellular or intracellular perturbations detected by death receptors, such as FAS and TNFR1, or pathogen recognition receptors (PRRs), including TLR3, TLR4, and DAI/ ZBP1. Necroptosis critically depends on MLKL, RIPK3, and (at least in some settings) on the kinase activity of RIPK1. Necroptotic cell death causes ion influx, cell swelling, and membrane lysis followed by the uncontrollable release of intracellular contents including pro-inflammatory cytokines and danger-associated molecular patterns (DAMPs).

Pyroptosis is a form of RCD driven by the activation of inflammasomes in the context of infection, tissue injury, or metabolic imbalances. Inflammasomes assemble upon selective sensing of pathogen-associated molecular patterns (PAMPs), DAMPs, or other immune challenges. Their assembly leads to the activation of proinflammatory caspases (Caspase-1 or Caspase-4/5/11) and cytokines (interleukin (IL)-1 and IL-18) and the pore-forming protein, Gasdermin-D. Pyroptosis is characterized by nuclear condensation, cell swelling, and the formation of plasma membrane pores leading to cell lysis and release of cellular contents such as HMGB1, a DAMP of large size. Pyroptosis constitutes a strong response to infection and cell stress, by alerting the immune system of imminent danger and by preventing the spread of the threat.

Learn more on necroptosis and pyroptosis

To facilitate your research on the above-mentioned forms of regulated cell death, InvivoGen offers a set of tools comprising: