Regulated cell death (RCD) is a lethal process taking place in the context of stressful stimuli (e.g. infections, metabolic disorders, or genotoxic agents) for which no restoration of cellular homeostasis could be completed [1, 2]. In contrast with accidental cell death (ACD), a biologically uncontrolled process, RCD involves tightly structured signaling cascades and molecularly defined effector mechanisms [1, 2]. There are two principal types of cell death, apoptosis, and necrosis, which mainly differ in duration, morphological aspects, and inflammatory outcomes. Necrosis has long been considered an ACD before the description of multiple regulated necrotic cell death mechanisms, including pyroptosis, necroptosis, ferroptosis, and NETosis [1-3]. ​There is evidence for extensive crosstalk between the different cell death pathways, ensuring threat best-fit responses [2, 3]. A better understanding of the molecular mechanisms underlying RCD is still required to develop efficient therapeutics for monogenic (i.e. due to the functional alteration of a gene) and inflammation-driven diseases [2].

Apoptosis was the first well-defined process of regulated cell death [1-3]. It is triggered either homeostatically (e.g. during embryonic development), or upon exposure to a variety of insults (e.g. engagement of TNF (tumor necrosis factor) family death domain receptors at the cell surface). Two primary apoptosis pathways exist, the intrinsic and extrinsic pathways. The intrinsic pathway is engaged by a variety of intracellular signals and leads to the activation of Caspase-9. In contrast, the extrinsic pathway is initiated by extracellular perturbations, through death receptors, and induces the activation of Caspase-8. Both the extrinsic and intrinsic apoptotic pathways lead to the activation of Caspase-3 which cleaves more than 500 cellular substrates for death induction.
Apoptosis is a slow process (6h to ~24h) that operates through DNA fragmentation, membrane blebbing, and the formation of apoptotic bodies. Neighboring phagocytes swiftly remove the dead cells and produce anti-inflammatory cytokines.
The absence of cell lysis and material release in the extracellular milieu prevents inflammation and tissue damage, thus acknowledging apoptosis safe self-destruction. Apoptosis is thus considered a "silent" form of cell death. 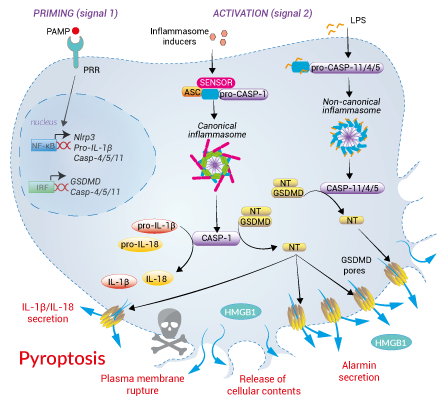 Pyroptosis is a form of regulated necrotic cell death that results from inflammasome activation [4, 5]. Inflammasomes are cytosolic multiprotein complexes generally comprised of a sensor and an inflammatory caspase connected to an adaptor protein (ASC). Their assembly can be triggered by a multitude of microbial and host-derived stimuli [4].

Inflammasome-associated caspases mediate the proteolytic cleavage and activation of the Gasdermin D N-terminal domain (GSDMD-NT) [5]. This functional domain translocates to the plasma membrane and oligomerizes to form pores. GSDMD pore formation at the cell membrane elicits the release of  IL-1β and IL-18 pro-inflammatory cytokines, as well as alarmin or DAMPs (danger-associated molecular patterns), such as HMGB1 (high mobility group B1 protein), into the extracellular space. Accumulation of GSDMD pores causes cell swelling and formation of bubble-like herniations, ultimately leading to plasma membrane rupture (PMR) [5].

Read our Practical guide on Inflammasomes 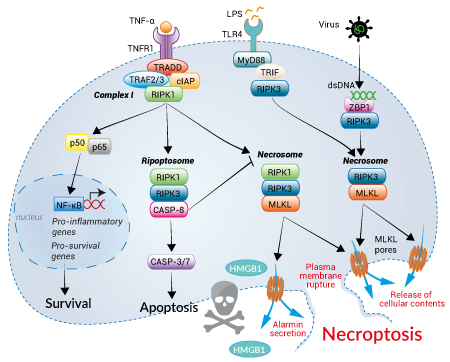 TNF-induced necroptosis is the most studied and best characterized necroptotic pathway [6]. TNF-α- ligation to its receptor, TNFR1, induces the formation of a receptor-bound complex (complex I) where the TNFR1-associated death domain protein (TRADD) associates with the receptor-interacting serine/threonine-protein kinase 1 (RIPK1). Within complex I, RIPK1 is ubiquitinylated by cellular inhibitors of apoptosis proteins (cIAPs) and phosphorylated by IKKα and IKKβ, leading to NF-KB activation and transcription of pro-survival genes [6-9]. Cell death occurs upon loss/inhibition of cIAPs: RIPK1 dissociates from the receptor-bound complex I and is incorporated into a second complex (aka ripoptosome) together with RIPK3 and Caspase-8 (CASP-8). CASP-8 activation leads to downstream apoptosis. When CASP-8 is absent or inactivated, RIPK1 and RIPK3 form a RHIM-dependent oligomeric amyloid structure, and RIPK3 recruits MLKL to form the RIPK1-RIPK3-MLKL necrosome [6-9].

Depending on your applications, InvivoGen offers: