Notification: Our anti-mouse IL-13 antibody raised in mice and produced in hybridoma (mabg-mil13/mabg-mil13-5) has been removed from our catalog. Its coding sequence has been determined and the antibody is now produced by recombinant technology and purified from CHO cells. 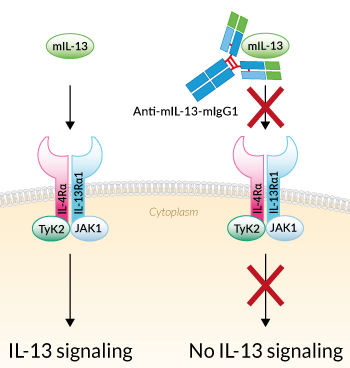 The sequence of Anti-mIL-13-mIgG1 is 100% murine (constant and variable regions), as the original clone (clone 8H8) was raised in mice using a proprietary method. This feature allows for reduced immunogenicity and risks of fatal hypersensitivity reactions upon repeated mAb injections into mice [2-4].

All InvivoFit™ products are handled in a clean room, filter-sterilized, and tested for bacterial contaminants. Additionally, this grade guarantees a low levels of endotoxins (<1 EU/ml). The buffer formulation is specifically adapted for in vivo studies.

Anti-mIL-13-mIgG1 is designed to efficiently neutralize the biological activity of mIL-13. Interleukin (IL-)13 is a multifunctional cytokine that plays an important role in the regulation of inflammation and immune responses [5,6]. 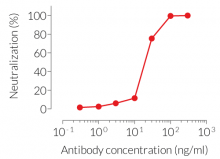 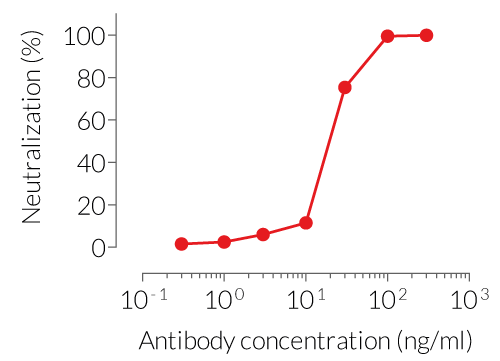 Anti-mIL-13-mIgG1 InvivoFit™ is a potent neutralization antibody. Increasing concentrations of Anti-mIL-13-mIgG1 InvivoFit™ were incubated for 30 minutes with the recombinant cytokine mIL-13 (5 ng/ml) prior to the addition of HEK-Blue™ IL-4/IL-13 cells. After overnight incubation, SEAP activity in the cell culture supernatant was assessed using QUANTI-Blue™ Solution. Data are shown in percentage (%) of neutralization.

Specificity: No cross-reactivity with human IL-13

Formulation of Anti-mIL-13-mIgG1: Lyophilized from 0.2 µm filtered solution in a sodium phosphate buffer with glycine, saccharose, and stabilizing agents

Formulation of Anti-mIL-13-mIgG1 InvivoFit™: Lyophilized from 0.2 µm filtered solution in a sodium phosphate buffer with 5% saccharose and 0.25% Polysorbate 80

Lyophilized product is stable for at least 1 year.

InvivoFit™ is a high-quality standard specifically adapted to in vivo studies. InvivoFit™ products are filter-sterilized (0.2 µm) and filled under strict aseptic conditions in a clean room. The level of bacterial contaminants (endotoxins and lipoproteins) in each lot is verified using a LAL assay and a TLR2 and TLR4 reporter assay.

Interleukin 13 (IL-13) is a pleiotropic cytokine that plays an important role in inflammation, fibrosis, allergic diseases and cancer. It is mainly produced by activated T cells and regulates several subtypes of T helper (Th) cells by affecting their transformation, including Th1, Th2, and Th17 cells. Previous studies have revealed that IL-13 is implicated in the pathogenesis of autoimmune diseases, such as systemic lupus erythematosus (SLE), rheumatoid arthritis (RA), and type 1 diabetes (T1D) [1].

IL-13 also exerts its anti-inflammatory effects by inhibiting the production of pro-inflammatory cytokines, such as TNF‑α. The biological functions of IL-13 overlap with those of IL-4. In fact, both IL-4 and IL-13 can bind to the same receptor complex, IL-13 receptor (IL-13R), which is composed of two subunits IL-4Rα and IL-13Rα1 [2]. The binding of IL-­4 or IL-13 to IL-13R instigates a signaling cascade involving the activation of receptor-associated Janus kinases (JAK1 and Tyk2) and the nuclear translocation of STAT6 (Signal Transducer and Activator of Transcription 6). The nuclear translocation of STAT6 ultimately leads to the induction of gene expression by IL-13 [3].