Chloroquine is a lysosomotropic agent that was historically developed as an anti-malarial treatment. However, it has become a widely used inhibitor for studying autophagy and the role of endosomal acidification in cellular processes (i.e. intracellular TLR signaling). As a weak base, chloroquine passively diffuses into the acidic compartments of the cell, including endosomes, Golgi vesicles, and lysosomes, where it becomes protonated, trapping it within the organelle. This accumulation of chloroquine leads to an increase in the pH of the compartment and the inhibition of several enzymes that require an acidic pH for proper functioning. Thus, chloroquine prevents maturation and fusion of endosomes and lysosomes [1].

Chloroquine has an extensive range of biological effects and due to its well-studied toxicity profile is one of the only autophagy inhibitors approved for use in the clinic. Chloroquine impairs the replication of several viruses, including members of flaviviruses, retroviruses, and coronaviruses, by inhibiting the necessary endosome acidification upon endosomal-mediated viral entry and vesicle trafficking in the later stages of infection (i.e. through the ER-Golgi and exocytosis from the cell) [2,3]. Additionally, the accumulation of chloroquine in lymphocytes and macrophages decreases the production of pro-inflammatory cytokines, specifically TNF-α, and results in anti-inflammatory properties [2]. Thus, chloroquine is used routinely in the clinic for inflammatory conditions such as rheumatoid arthritis (RA) and systemic lupus erythematosus (SLE) [4]. Finally, modulation of autophagy by chloroquine has been shown to have potential in delaying the onset and/or enhancing therapies for various pathologies such as cancer, chronic obstructive pulmonary disease (COPD), and inflammatory diseases. Specifically, it has been shown, in vitro and in vivo, that chloroquine has a detrimental effect on the basal autophagic flux by decreasing autophagosome-lysosome fusion due to impaired function of essential hydrolases [5].

Chloroquine provided by InvivoGen is for research use only.

Coronaviruses, such as SARS-CoV and presumably SARS-CoV-2, enter and traffic through the host cell in endosomes. Targeting endosomal acidification and intracellular trafficking with chloroquine is one of the strategies to limit SARS-CoV-2 infection.

Chloroquine is shipped at room temperature.

Product in powder form is stable for 6 months at room temperature when properly stored. 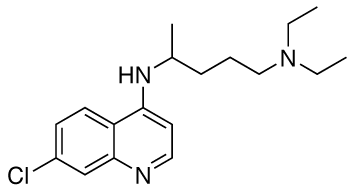 Wnt5a is a TLR2/4-ligand that induces tolerance in human myeloid cells.

MARCH2 is upregulated in HIV-1 infection and inhibits HIV-1 production through envelope protein translocation or degradation.