TLRs are evolutionarily conserved receptors are homologues of the Drosophila Toll protein, discovered to be important for defense against microbial infection [1]. TLRs recognize highly conserved structural motifs known as pathogen-associated microbial patterns (PAMPs), which are exclusively expressed by microbial pathogens,
or danger-associated molecular patterns (DAMPs) that are endogenous molecules released from necrotic or dying cells.

PAMPs include various bacterial cell wall components such as lipopolysaccharide (LPS), peptidoglycan (PGN) and lipopeptides, as well as flagellin, bacterial DNA and viral double-stranded RNA. DAMPs include intracellular proteins such as heat shock proteins as well as protein fragments from the extracellular matrix.

Stimulation of TLRs by the corresponding PAMPs or DAMPs initiates signaling cascades leading to the activation of transcription factors, such as AP-1, NF-κB and interferon regulatory factors (IRFs). Signaling by TLRs result in a variety of cellular responses including the production of interferons (IFNs), pro-inflammatory cytokines and effector cytokines that direct the adaptive immune response.

TLRs are type I transmembrane proteins characterized by an extracellular domain containing leucine-rich repeats (LRRs) and a cytoplasmic tail that contains a conserved region called the Toll/IL-1 receptor (TIR) domain.  The structure of the extracellular domain of TLR3 was revealed by crystallography studies as a large horseshoe-shape [2]. 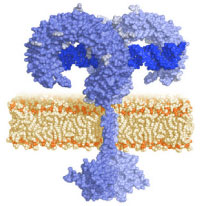 TLRs are predominantly expressed in tissues involved in immune function, such as spleen and peripheral blood leukocytes, as well as those exposed to the external environment such as lung and the gastrointestinal tract.
Their expression profiles vary among tissues and cell types. TLRs are located on the plasma membrane with the exception of TLR3, TLR7, TLR9 which are localized in the endosomal compartment [3].

Ten human and twelve murine TLRs have been characterized, TLR1 to TLR10 in humans, and TLR1 to TLR9, TLR11, TLR12 and TLR13 in mice, the homolog of TLR10 being a pseudogene.

TLR2 is essential for the recognition of a variety of PAMPs from Gram-positive bacteria, including bacterial lipoproteins, lipomannans and lipoteichoic acids. TLR3 is implicated in virus-derived double-stranded RNA. TLR4 is predominantly activated by lipopolysaccharide. TLR5 detects bacterial flagellin and TLR9 is required for response to unmethylated CpG DNA. Finally, TLR7 and TLR8 recognize small synthetic antiviral molecules [4], and single-stranded RNA was reported to be their natural ligand [5]. TLR11(12) has been reported to recognize uropathogenic E.coli [6] and a profilin-like protein from Toxoplasma gondii [7].

The repertoire of specificities of the TLRs is apparently extended by the ability of TLRs to heterodimerize with one another. For example, dimers of TLR2 and TLR6 are required for responses to diacylated lipoproteins while TLR2 and TLR1 interact to recognize triacylated lipoproteins [8]. Specificities of the TLRs are also influenced by various adapter and accessory molecules, such as MD-2 and CD14 that form a complex with TLR4 in response to LPS [9].

TLR signaling consists of at least two distinct pathways: a MyD88-dependent pathway that leads to the production of inflammatory cytokines, and a MyD88-independent pathway associated with the stimulation of IFN-β and the maturation of dendritic cells.

The MyD88-dependent pathway is common to all TLRs, except TLR3 [10]. Upon activation by PAMPs or DAMPs, TLRs hetero- or homodimerize inducing the recruitment of adaptor proteins via the cytoplasmic TIR domain.
Adaptor proteins include the TIR-domain containing proteins, MyD88, TIRAP (TIR-associated protein), Mal (MyD88 adaptor-like protein), TRIF (TIR domain-containing adaptor protein-inducing IFN-β) and TRAM (TRIF-related adaptor molecule).
Recruitment of MyD88 for instance, in turn recruits IRAK1 and IRAK4. IRAK4 subsequently activates IRAK1 by phosphorylation. Both IRAK1 and IRAK4 leave the MyD88-TLR complex and associate temporarily with TRAF6 leading to its ubiquitination. Bcl10 and MALT1 form oligomers that bind to TRAF6 promoting TRAF6 self-ubiquitination [11].
Recently, IRAK2 was shown to play a central role in TRAF6 ubiquitination [12]. Following ubiquitination, TRAF6 forms a complex with TAB2/TAB3/TAK1 inducing TAK1 activation [13]. TAK1 then couples to the IKK complex, which includes the scaffold protein NEMO, leading to the phosphorylation of IκB and the subsequent nuclear localization of NF-κB. Activation of NF-κB triggers the the production of pro-inflammatory cytokines such as TNF-α, IL-1 and IL-12.

Individual TLRs induce different signaling reponses by usage of the different adaptor molecules.
TLR4 and TLR2 signaling requires the adaptor TIRAP/Mal, which is involved in the MyD88-dependent pathway [14]. TLR3 triggers the production of IFN-β in response to double-stranded RNA, in a MyD88-independent manner, through the adaptor TRIF/TICAM-1 [15]. TRAM/TICAM-2 is another adaptor molecule involved in the MyD88-independent pathway [5] which function is restricted to the TLR4 pathway [16].

TLR3, TLR7, TLR8 and TLR9 recognize viral nucleic acids and induce type I IFNs. The signaling mechanisms leading to the induction of type I IFNs differ depending on the TLR activated. They involve the interferon regulatory
factors, IRFs, a family of transcription factors known to play a critical role in antiviral defense, cell growth and immune regulation. Three IRFs (IRF3, IRF5 and IRF7) function as direct transducers of virus-mediated TLR signaling. TLR3 and TLR4 activate IRF3 and IRF7 [17], while TLR7 and TLR8 activate IRF5 and IRF7 [18]. Furthermore, type I IFN production stimulated by TLR9 ligand CpG-A has been shown to be mediated by PI(3)K and mTOR [19].

Significant progress has been made over the past years in the understanding of TLR function [20]. TLRs are essential receptors in host defense against pathogens by activating the innate immune system, a prerequisite to the induction of adaptive immune responses.

Although TLR-mediated signaling is paramount in eradicating microbial infections and promoting tissue repair, the regulation must be tight. TLRs are implicated in a number of inflammatory and immune disorders and play a role in cancer [21].
Many single nucleotide polymorphisms have been identified in various TLR genes and are associated with particular diseases. Several therapeutic agents targeting the TLRs are now under pre-clinical and clinical
evaluation [22].

However, the complexity lies in that TLRs act as double-edged swords either promoting or inhibiting disease progression. Furthermore, therapeutic agents targeting the TLRs must be able to antagonize the harmful effects resulting without affecting host defense functions.
Nonetheless, the potential of harnessing and directing the innate immune system with drugs targeting TLRs, to prevent or treat human inflammatory and autoimmune diseases as well as cancer, appears to be promising.