Adjuvants are essential for enhancing and directing the adaptative immune response to vaccine antigens. This response is mediated by two main types of lymphocytes, B and T cells. 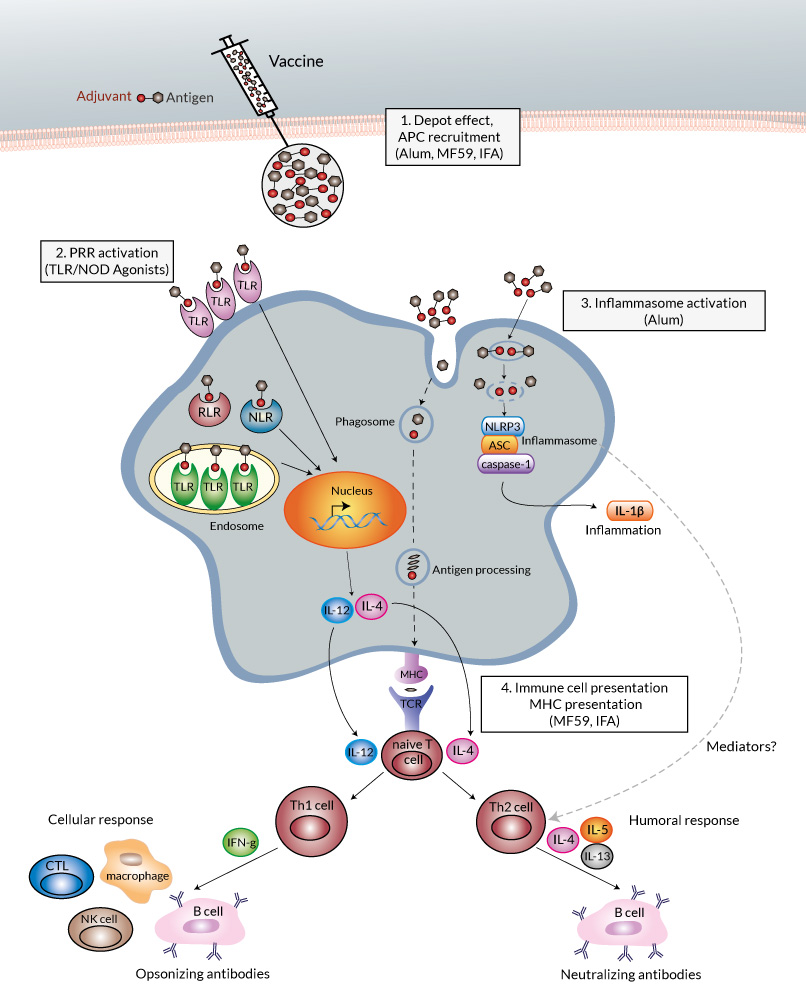 Upon activation by cytokines, B cells differentiate into memory B cells (long-lived antigen-specific B cells) or plasma cells (effector B cells that secrete large quantities of antibodies). Most antigens activate B cells using activated T helper (Th) cells, primarily Th1 and Th2 cells.

Th1 cells secrete IFN-γ, which activates macrophages and induces the production of opsonizing antibodies by B cells. The Th1 response leads mainly to a cell-mediated immunity (cellular response), which protects against intracellular pathogens (invasive bacteria, protozoa and viruses). The Th1 response activates cytotoxic T lymphocytes (CTL), a sub-group of T cells, which induce death of cells infected with viruses and other intracellular pathogens. Natural killer (NK) cells are also activated by the Th1 response, these cells play a major role in the induction of apoptosis in tumors and cells infected by viruses.

The magnitude and type of Th response to a vaccine can be greatly modulated through the use of adjuvants. For almost 80 years, aluminium salts (referred to as ‘alum’) have been the only adjuvant in use in human vaccines. Only in the last two decades, have novel adjuvants (MF59®, AS04) been introduced in the formulation of new licensed vaccines. As our understanding of the mechanisms of ‘immunogenicity’ and ‘adjuvancy’ increases, new adjuvants and adjuvant formulations are being developed.

Adjuvants may exert their effects through different mechanisms. Some adjuvants, such as alum and emulsions (e.g. MF59®), function as delivery systems by generating depots that trap antigens at the injection site, providing slow release in order to continue the stimulation of the immune system. These adjuvants enhance the antigen persistence at the injection site and increase recruitment and activation of antigen presenting cells (APCs). Particulate adjuvants (e.g. alum) have the capability to bind antigens to form multi-molecular aggregates which will encourage uptake by APCs [1].
Some adjuvants are also capable of directing antigen presentation by the major histocompatibility complexes (MHC) [1].
Other adjuvants, essentially ligands for pattern recognition receptors (PRR), act by inducing the innate immunity, predominantly targeting the APCs and consequently influencing the adaptative immune response. Members of nearly all of the PRR families are potential targets for adjuvants. These include Toll-like receptors (TLRs), NOD-like receptors (NLRs), RIG-I-like receptors (RLRs) and C-type lectin receptors (CLRs). They signal through pathways that involve distinct adaptor molecules leading to the activation of different transcription factors. These transcription factors (NF-κB, IRF3) induce the production of cytokines and chemokines that play a key role in the priming, expansion and polarization of the immune responses. Activation of some members of the NLR family, such as NLRP3 and NLRC4, triggers the formation of a protein complex, called inflammasome, implicated in the induction of the pro-inflammatory cytokines IL-1β [2] and IL-18. The NLRP3 and NLRC4 inflammasomes have been involved in the innate immunity induced by certain adjuvants but their mechanism of action remains unclear.

Alum is the most commonly used adjuvant in human vaccination. It is found in numerous vaccines, including diphtheria-tetanus-pertussis, human papillomavirus and hepatitis vaccines [3]. Alum provokes a strong Th2 response, but is rather ineffective against pathogens that require Th1–cell-mediated immunity. Alum induces the immune response by a depot effect and activation of APCs. Recently, the NLRP3 inflammasome has been linked to the immunostimulatory properties of alum [2] although its role in adjuvant-induced antibody responses remains controversial.
Emulsions (either oil-in-water or water-in-oil), such as Freund’s Incomplete Adjuvant (IFA) and MF59®, can trigger depot generation and induction of MHC responses. IFA induces a predominantly Th2 biased response with some Th1 cellular response. MF59® is a potent stimulator of both cellular (Th1) and humoral (Th2) immune responses [4]. However, the precise mode of action of emulsion-based adjuvants is still unclear. A complication with emulsion-based adjuvants is their potential to induce autoimmunity.

As classical adjuvants induce strong Th2 response with little or no Th1 response, the current challenge is to develop adjuvants which induce a strong Th1 bias important for vaccines against hepatitis, flu, malaria, and HIV.
New adjuvants are being developed that are natural ligands or synthetic agonists for PRRs, either alone or with various formulations. PRR activation stimulates the production of pro-inflammatory cytokines/chemokines and type I IFNs that increase the host’s ability to eliminate the pathogen. Thus, the incorporation of pathogens associated molecular patterns (PAMPs) in vaccine formulations can improve and accelerate the induction of vaccine-specific responses. A number of these agonists are now in clinical or late preclinical stages of development for hepatitis and human papillomavirus  vaccines [5, 6.] When used in combination with alum or classical emulsion adjuvants, the immune response can be biased towards a Th1 response [7].

Double-stranded RNA (dsRNA), which is produced during the replication of most viruses, is a potent inducer of innate immunity. Synthetic analogs of dsRNA, such as poly(I:C), have been tested as adjuvants. They act through TLR3 and RIG-I/MDA-5, inducing IL-12 and type I IFNs production, facilitating antigen cross-presentation to MHC class II molecules, and improving generation of cytotoxic T cells [8].

Bacterial lipopolysaccharides (LPS), which are ligands for TLR4, have long been recognized as potent adjuvants, but their pyrogenic activity have prevented their clinical use. The development of less toxic derivatives led to the production of MPLA (monophosphoryl lipid A), which formulated with alum (AS04) triggers a polarized Th1 response and is approved for clinical use in Europe [8].

The TLR5 ligand, bacterial flagellin, is a potent T-cell antigen and has potential as a vaccine adjuvant. Unlike other TLR agonists, flagellin tends to produce mixed Th1 and Th2 responses rather than strongly Th1 responses. Flagellin can be used as an adjuvant mixed with the antigen but it is more frequently fused to a recombinant vaccine antigen [9, 10].

The TLR7/8 pathway, specialized in the recognition of single stranded viral RNA, has demonstrated promising pre-clinical results as a target for potential vaccine adjuvants. Imidazoquinolines (i.e. imiquimod, gardiquimod and R848) are synthetic componds that activate TLR7/8 in multiple subsets of dendritic cells leading to the production of IFN-α and IL-12 thus promoting a Th1 response [5].

Oligodeoxynucleotides containing specific CpG motifs (CpG ODNs such as ODN 1826 and ODN 2006) are recognized by TLR9. They enhance antibody production and strongly polarize Th cell responses to Th1 and away from Th2 responses [11,12].

Fragments of bacterial cell walls, such as muramyl dipeptide (MDP), have long been recognized as adjuvants. More recently, it was discovered that MDP triggers the activation of NOD2 and the NLRP3 inflammasome [13].

Adjuvants may be combined to achieve a stronger effect or a more potent skewing of immune responses. Currently, much effort is devoted to combining alum with TLR9 agoinsts [14]. In experimental models, administration of other combinations such as CpG ODNs with MDP or MPLA has proven very effective [15]. Adjuvants currently in clinical use enhance humoral responses but new adjuvants in clinical and preclinical trials are focused on generating multifaceted immune responses. The PRR pathways are an attractive source of novel adjuvants for vaccines due to their ability to induce strong cell-mediated immunity.

The mark MF59® is a registered trademark of Novartis, and is used for comparative purposes only. AddaVax™ is not made by, affiliated with, sponsored by or endorsed by Novartis. Novartis has not evaluated or approved the representations contained herein.