When you can’t do it alone: TLR2 heterodimers and innate immunity

The early detection of microbes by pattern recognition receptors (PRRs) such as toll-like receptors (TLRs), is crucial for initiating the innate immune responses needed to provide protection to the host. In particular, toll-like receptor 2 (TLR2) plays an essential role in detecting a diverse range of microbial pathogen-associated molecular patterns (PAMPs) from bacteria, fungi, and parasites. These PAMPs include cell-wall components  such as lipoproteins, lipoteichoic acid (Gram-positive bacteria only), lipoarabinomannan (mycobacteria only), and chitin (fungi)1,2. Interestingly, a number of viruses have also been shown to interact directly with TLR2 including HIV and herpes simplex virus3,4. It should also be noted that the majority of the experimental data for TLR2 signaling has been generated using synthetic ligands, and with further studies using whole bacteria, such as heat-killed bacteria, the full range of potential responses that follow TLR2 activation may be elucidated.

TLRs are divided into 6 major subfamilies according to one of their key features, their leucine-rich repeat (LRR) domains and TLR2 along with TLR1, TLR6, and TLR10 form the TLR1 subfamily5. It is well established that TLR2 forms a heterodimer (Fig. 1) on the cell surface, crucial for signaling and ligand specificity, with co-receptors TLR1 or TLR6, commonly selected for in research using neutralization antibodies6,7,8. TLR2 as a functional homodimer has only been proposed, with no evidence proving that it triggers a signaling cascade to date9. It has been suggested that the TLR2 heterodimers are pre-formed on the cell surface, and without a ligand the intracellular Toll/interleukin-1 receptor (TIR) domains are unable to interact and no signaling cascade is initiated. The TLR2/TLR1 and TLR2/TLR6 heterodimers are known to specifically bind lipoproteins depending on whether they are tri- or diacylated, respectively7,8. This discriminative binding is due to structural differences, specifically the presence of a hydrophobic channel in TLR1 that binds the third acetylated chain in the lipoprotein, which is absent from TLR6. Moreover, ligand recognition is enhanced by its non-specific delivery to TLR2 by CD14, sometimes in combination with additional ligand-specific molecules such as CD36 and Dectin-110,11. When CD14 is blocked, TLR2 signaling is greatly reduced. Interestingly, TLR10 has also been shown to form a possible heterodimer with TLR2 with binding specificity for ligands similar to the TLR2/TLR1 heterodimer; however, no function or specific signaling pathway have been determined12. 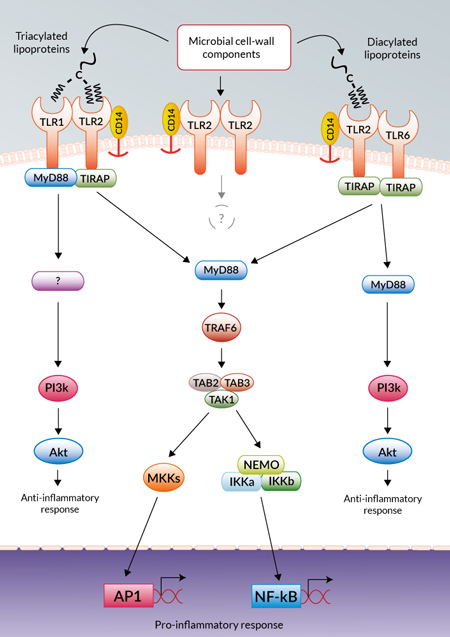 TLR2 signaling is initiated by ligand-induced dimerization of the essential cytoplasmic TIR domains of the TLR2 heterodimers13. This then triggers a cascade of phosphorylation events that vary depending on whether it was TLR2/1 or TLR2/6 that was stimulated, ultimately initiating diverse innate and adaptive immune responses in the host (Fig. 2)14. These signaling cascades lead to a MyD88 and MAL/TIRAP-dependent activation of pro-inflammatory transcription factors such as NF-κB and AP-115,16. In addition, the PI3K/Akt pathway may also be activated leading to the production of anti-inflammatory cytokines such as IL-1017. Interestingly, this diversity has been attributed, in part, to slight modifications of the ligand with the length of the lipid moiety of lipoproteins, for example from Staphylococcus sp., shown to determine the balance between tolerant and defensive responses18. Lipoproteins from Staphylococcus sp. such as S. aureus and S. epidermidis, acylated with long-chained fatty acids associated with the TLR2/1 heterodimer were found to silence the immune response (tolerance), whereas Staphylococcus sp. such as S. carnosus, lipoproteins acylated with short-chained fatty acids associated with the TLR2/6 heterodimer enhanced the immune response (defense)18.

TLR2 is an important receptor detecting a large spectrum of microbial PAMPs. An essential feature of TLR2 is its ability to form heterodimers with TLR1 and TLR6, which not only expands the range of PAMPs that it can recognize but may also diversify the downstream signaling cascades that it triggers within a host, allowing considerable plasticity in TLR2-dependent recognition and signaling. This means that the array of TLR2 ligands may be different from what was originally suspected and will only continue to evolve with future work. Furthermore, the plasticity in downstream signaling, along with its ligand specificity is why TLR2 is a promising target being explored for ‘proof-of-concept’ of antibody immunotherapy in the treatment of diseases such as sepsis19. Therefore, by studying the heterodimers separately and/or in combination (TLR/TLR2, TLR2/TLR1 or TLR2/6), a better understanding of their unique ligand activation and subsequent cytokine profiles will be possible. InvivoGen provides a large collection of engineered reporter cell lines that are designed for investigating the TLR2 signaling pathways.