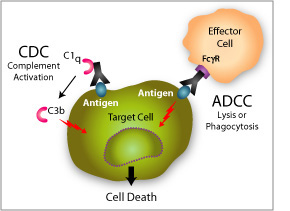 The Fc region of an antibody mediates its serum half-life and effector functions, such as complement-dependent cytotoxicity (CDC), antibody-dependent cellular cytotoxicity (ADCC) and antibody-dependent cell phagocytosis (ADCP).
Engineering the Fc region of a therapeutic monoclonal antibody or Fc fusion protein allows the generation of molecules that are better suited to the pharmacology activity required of them [1].

One approach to improve the efficacy of a therapeutic antibody is to increase its serum persistence, thereby allowing higher circulating levels, less frequent administration and reduced doses.
The half-life of an IgG depends on its pH-dependent binding to the neonatal receptor FcRn. FcRn, which is expressed on the surface of endothelial cells, binds the IgG in a pH-dependent manner and protects it from degradation.
Some antibodies that selectively bind the FcRn at pH 6.0, but not pH 7.4, exhibit a higher half-life in a variety of animal models.
Several mutations located at the interface between the CH2 and CH3 domains, such as T250Q/M428L [2] and M252Y/S254T/T256E + H433K/N434F [3], have been shown to increase the binding affinity to FcRn and the half-life of IgG1 in vivo.
However, there is not always a direct relationship between increased FcRn binding and improved half-life [4].

The four human IgG isotypes bind the activating Fcγ receptors (FcγRI, FcγRIIa, FcγRIIIa), the inhibitory FcγRIIb receptor, and the first component of complement (C1q) with different affinities, yielding very different effector functions [5].
Binding of IgG to the FcγRs or C1q depends on residues located in the hinge region and the CH2 domain. Two regions of the CH2 domain are critical for FcγRs and C1q binding, and have unique sequences in IgG2 and IgG4. Substitutions into human IgG1 of IgG2 residues at positions 233-236 and IgG4 residues at positions 327, 330 and 331 were shown to greatly reduce ADCC and CDC [6, 7]. Furthermore, Idusogie et al. demonstrated that alanine substitution at different positions, including K322, significantly reduced complement activation [8]. Similarly, mutations in the CH2 domain of murine IgG2A were shown to reduce the binding to FcγRI, and C1q [9].

Numerous mutations have been made in the CH2 domain of human IgG1 and their effect on ADCC and CDC tested in vitro [7-10]. Notably, alanine substitution at position 333 was reported to increase both ADCC and CDC [7, 9.] Lazar et al. described a triple mutant (S239D/I332E/A330L) with a higher affinity for FcγRIIIa and a lower affinity for FcγRIIb resulting in enhanced ADCC [11]. The same mutations were used to generate an antibody with increased ADCC [12]. Richards et al. studied a slightly different triple mutant (S239D/I332E/G236A) with improved FcγRIIIa affinity and FcγRIIa/FcγRIIb ratio that mediates enhanced phagocytosis of target cells by macrophages [13].

Due to their lack of effector functions, IgG4 antibodies represent the preferred IgG subclass for receptor blocking without cell depletion. IgG4 molecules can exchange half-molecules in a dynamic process termed Fab-arm exchange. This phenomenon can occur between therapeutic antibodies and endogenous IgG4.
The S228P mutation has been shown to prevent this recombination process allowing the design of less unpredictable therapeutic IgG4 antibodies [14].