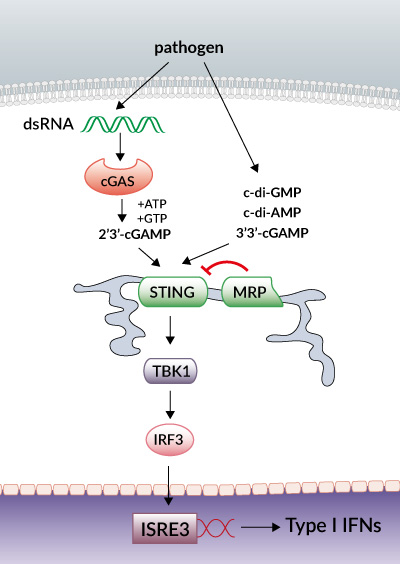 STING (stimulator of interferon genes), alternatively known as MPYS, TMEM173, MITA and ERIS, is a key sensor of cytosolic nucleic acids.
In the past year, an incredible amount has been revealed on the biology of STING. As the studies were published, the complexity of STING became apparent. STING, initially thought to serve solely as an adaptor protein for mediating signaling by cytosolic DNA sensors (CDS), was recently found to be a direct sensor of cyclic dinucleotides (CDNs) [1].

Surprisingly, certain cells are able to respond to cytosolic DNA and the cGAS product but are poorly responsive to direct administration of cGAMP. With several close structural examinations, another key discovery was made.
Metazoan cGAMP is structurally distinct to the bacterial cGAMP [5,6]. Metazoan cGAMP contains [G(2′,5′)-pA(3′,5′)p] phosphodiester linkages, whereas bacterial cGAMP contains [G(3′,5′)pA(3′,5′)p] linkages. Thus arose the nomenclature 3′3′-cGAMP for the bacterial “canonical” cyclic dinucleotide, and 2′3′-cGAMP relating to the mammalian “noncanonical” cGAS-produced cGAMP. The latter cGAS-produced cGAMP was found to bind STING with stronger affinity than bacterial cGAMP, inducing a robust IFN response [7,8].

Interestingly, a variety of natural variants of human STING (hSTING) have been identified [9]. The presence of non-synonymous variants of hSTING, some in high frequencies is indicative of its implicit role in disease. It is important to be aware that variant hSTING alleles differentially respond to cGAMPs.
Several of the aforementioned studies were performed on the hSTING allele containing the H232 allele and not R232 that is now known as the wild type hSTING prevalent in ~60% of the population.
Furthermore, the variant hSTING haplotype (HAQ) found in the THP1 monocytic cell line has low intrinsic activity but responds to bacterial and metazoan CDNs.
Very recently, a splice variant of hSTING, named MRP, has been identified in HeLa and 293T cells that acts as a dominant negative regulator of STING-mediated IFN production [10].

The STING variants (alleles and mutants) and different forms of CDNs are powerful tools to further understand STING biology. Important lessons have been learned the hard way.
A small molecule DMXAA (Vadimezan or ASA404) that failed in phase III clinical trials in combination with chemotherapy, was found to stimulate STING signaling in mice but not in humans [11]. Together, these studies underscore the careful attention required when it comes to conducting experiments and interpreting the role of STING.