To date, 22 NLRs have been identified in humans and constitute a major class of intracellular pattern recognition receptors (PRRs).

The mammalian NLRs can be divided into four subfamilies, based on different N-terminal effector domains. The effector domains found in NLRs are CARDs, pyrin domains (PYDs), baculoviral inhibitor of apoptosis repeat (BIR) domains, or the transactivator domain (AD). 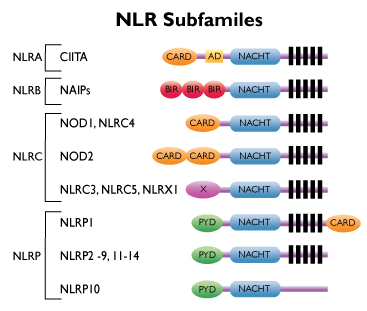 The physiological importance of these cytosolic sensors is underscored by a high incidence of genetic mutations that are associated with chronic inflammatory or autoimmune disorders. 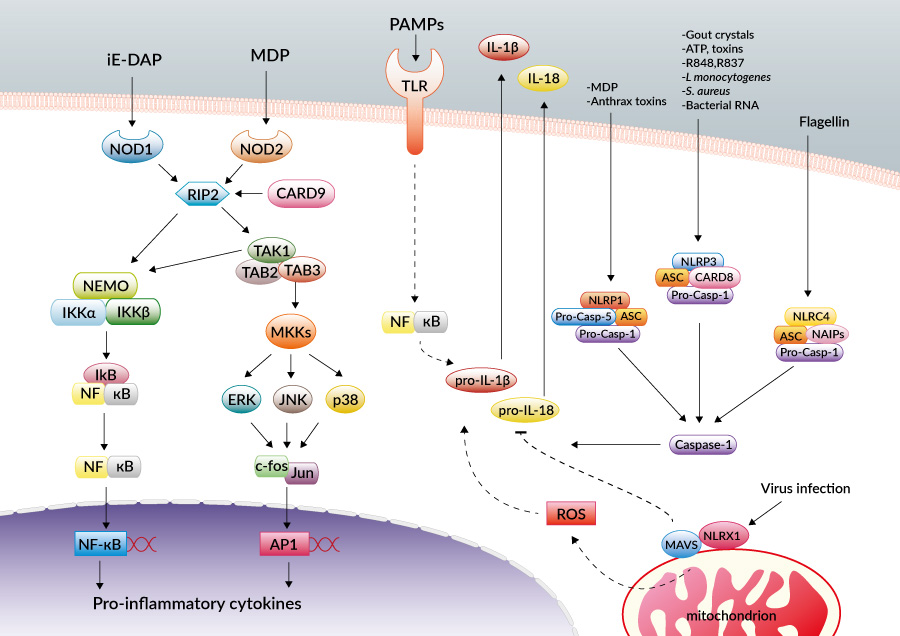 The founding NLRs members NOD1 (CARD4) and NOD2 (CARD15) fall into the NLRC subfamily and contain one and two N-terminal CARD domains, respectively.

NOD1 and NOD2 recognize distinct motifs of peptidoglycan (PGN), an essential constituent of the bacterial cell wall.
NOD1 senses the D-γ-glutamyl-meso-DAP dipeptide (iE-DAP), which is found in PGN of all Gram-negative and certain Gram-positive bacteria [1, 2] whereas NOD2 recognizes the muramyl dipeptide (MDP) structure found in almost all bacteria.
Thus NOD2 acts as a general sensor of PGN and NOD1 is involved in the recognition of a specific subset of bacteria.

Both iE-DAP and MDP must be delivered intracellularly either by bacteria that invade the cell or through other cellular uptake mechanisms. Ligand bound NOD1 and NOD2 oligomerize and signal via the serine/threonine RIP2 (RICK,CARDIAK) kinase through CARD-CARD homophilic interactions [3].
Once activated, RIP2 mediates ubiquitination of NEMO/IKKγ leading to the activation of NF-κB and the production of inflammatory cytokines. Furthermore, poly-ubiquitinated RIP2 recruits TAK1, which leads to IKK complex activation and the activation of MAPKs [4]. Signaling by NOD2 has been shown to involve the adapter protein CARD9, to mediate p38 and JNK signaling through RIP2 [5]. 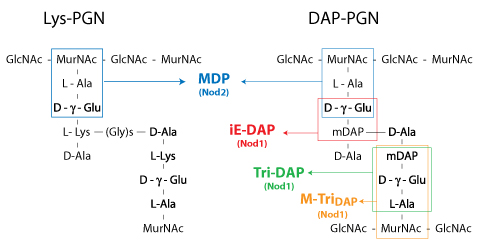 NLRC4 (IPAF, CLAN/CARD12) belongs to the NLRC subfamily. NLRC4 plays a key role in the regulation of caspase-1 by forming a multiprotein complex called the “inflammasome”.

Caspase-1 participates in the processing and subsequent release of proinflammatory cytokines, such as IL-1β and IL-18. Caspase-1 activation induced by cytosolic flagellin has been shown to be NLRC4-dependent, but TLR5-independent [7].
Thus, it appears that TLR5 and NLRC4 are distinct sensors that respond to extracellular and cytosolic flagellin, respectively [8].

Further, it has been been demonstrated that NAIPs (NLRB subfamily members) serve as NLRC4 inflammasome receptors for flagellin and a conserved type III secretion system (TTSS) rod component [9].


NLRX1 (NOD9) is the first NLR protein shown to be localized at the mitochondria [10].
NLRX1 negatively impacts antiviral inflammatory response via the RIG-I/IPS-I sensing pathway [11, 12] and LPS-elicited responses via the TRAF6-IKK signaling pathway [12, 13].

Conversely, it has been shown that NLRX1 positively controls NF-κB and JNK signaling pathway to activate reactive oxygen species (ROS) production in response to TNF-α, poly(I:C), and pathogens [14, 15].

Further studies are needed to clarify the role of NLRX1 in antiviral immunity.

The NLRP subfamily consists of 14 members characterized by their PYD effector domains.

NLRP1 and NLRP3 recruit through their PYD domain the adaptor protein ASC, which in turn interacts with caspase-1 via a CARD-CARD interaction. NLRP1 also recruits caspase-5 via its additional CARD effector domain at the C-terminus, whereas NLRP3, lacking such a CARD, interacts with the CARD-containing adaptor CARD8 (Cardinal) to recruit additional caspase-1.