Recognition of dsRNA by RIG-I/MDA-5 or TLR3 is cell-type dependent. Studies of RIG-I- and MDA-5-deficient mice have revealed that conventional dendritic cells (DCs), macrophages and fibroblasts isolated from these mice have impaired IFN induction after RNA virus infection, while production of IFN is still observed in plasmacytoid DCs (pDCs) [2]. Thus in cDCs, macrophages and fibroblasts, RLRs are the major sensors for viral infection, while in pDCs, TLRs play a more important role.

RIG-I and MDA-5 contain a DExD/H box RNA helicase and two caspase recruiting domain (CARD)-like domains.
The helicase domain interacts with dsRNA, whereas the CARD domains are required to relay the signal. 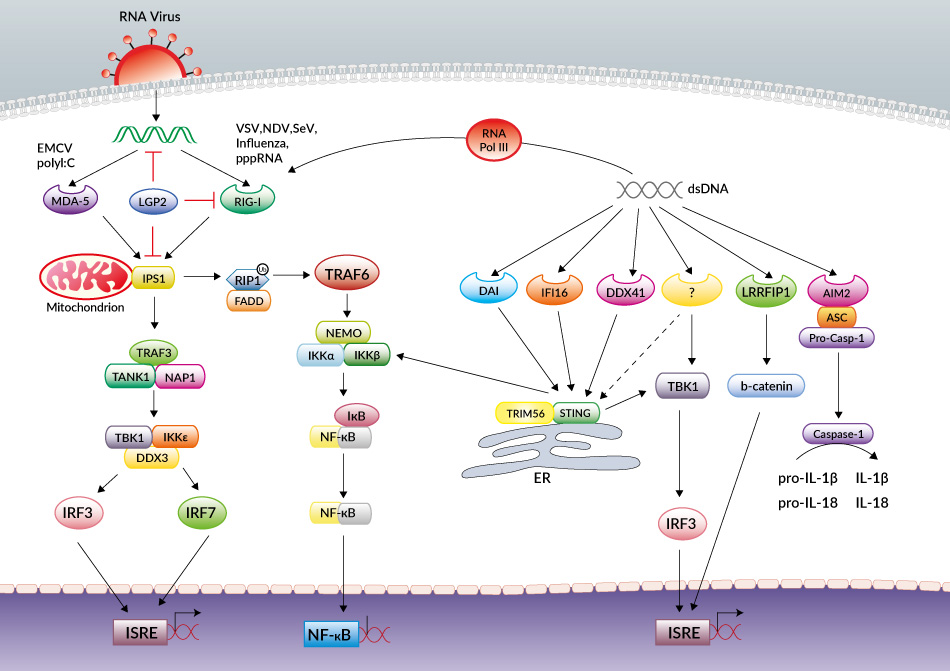 Notably, RIG-I binds specifically to single stranded RNA containing 5’-triphosphate such as viral RNA and in vitro-transcribed long dsRNA [4]. It has been shown that RIG-I binds preferentially to short dsRNA while MDA-5 recognizes preferentially long dsRNA [5]. Further cytosolic B DNA, such as transfected poly(dA:dT), can be transcribed by RNA polymerase III into a double-stranded RNA intermediate. This RNA intermediate contains a 5’-triphosphate moiety which is detected by RIG-I [6, 7].

Although RIG-I and MDA-5 recognize different ligands, they share common signaling features. Upon recognition of dsRNA, they are recruited by the adaptor IPS-1 (also known as MAVS, CARDIF or VISA) to the outer membrane of the mitochondria leading to the activation of several transcription factors including IRF3, IRF7 and NF-κB [8]. IRF3 and IRF7 control the expression of type I IFNs, while NF-κB regulates the production of inflammatory cytokines. IRF3 and IRF7 activation involves TNF (tumor necrosis factor) receptor-associated factor 3 (TRAF3), NAK-associated protein 1 (NAP1), TANK and the protein kinase TANK-binding kinase 1 (TBK1) or IκB kinase epsilon (IKKε) [8-10].

DDX3, a DEAD box helicase, was shown to interact with TBK1/IKKε [11]. IPS-1 interacts also with Fas-associated-death-domain (FADD) and receptor interacting protein 1 (RIP1) which induces the activation of the NF-κB pathway [8-11].

Suppressors of the RIG-I/MDA-5 signaling pathway

A third RLR has been described: LGP2 (or DHX58). LGP2 contains a RNA binding domain but lacks the CARD domains and thus acts as a negative feedback regulator of RIG-I and MDA-5.
LGP2 appears to exert this activity at multiple levels by i) competitively sequestering dsRNA, ii) forming a protein complex with IPS-1, and/or iii) binding directly to RIG-I through a repressor domain [13-15].

Many other molecules seem to be involved in the negative control of RIG-I/MDA-5-induced IFN production. Dihydroxyacetone kinase (DAK), A20, ring-finger protein 125 (RNF125), suppressor of IKKε (SIKE), and peptidyl-propyl isomerase 1 (Pin1), have been described as physiological suppressors of the RIG-I/MDA-5 signaling pathway.

The endoplasmic reticulum (ER)-resident transmembrane protein stimulator of IFN genes (STING) functions as an essential signalling adaptor, linking the cytosolic detection of DNA to the TBK1-IRF3 signalling axis [17].
STING is induced by an IFN-inducible ligase called TRIM56 [18]. The DNA sensor IFI16 has been found to recruit STING to activate a TBK1-IRF3-dependent pathway to IFN-β induction. IFI16 is part of a larger protein family termed the pyrin and HIN domain (PYHIN) family.

Another member of the PYHIN family, AIM2 (absent in melanoma 2), is a cytosolic DNA receptor that forms an inflammasome with ASC triggering caspase 1 activation and the subsequent of production of IL-1β and IL-18. DNA of various origins, such as poly(dA:dT), plasmidic DNA and DNA from the bacterium L. monocytogenes have been shown to activate AIM2 [19]. Upon activation, AIM2 interacts with ASC, a common adapter of the inflammasomes, leading to the cleavage of caspase-1 and the secretion of IL-1β and IL-18.

p202 is another member of the PYHIN family shown to bind cytoplasmic dsDNA but, in contrast to AIM2, it represses caspase activation [20].

LRRFIP1 can recognize AT-rich B-form dsDNA as well as GC-rich Z-form dsDNA [21]. With the use of LRRFIP1-specific siRNA, Yang et al. demonstrated that LRRFIP1 triggers the production of IFN-β in a β-catenin-dependent manner. β-Catenin binds to the C-terminal domain of IRF3 inducing an increase in IFN- β expression.

More recently, the helicase DDX41 has been identified as an additional DNA sensor that depends on STING to sense pathogenic DNA [22].

The recognition of cytosolic DNA is more complicated than first anticipated. Several sensors have been identified that trigger different signaling pathways in a cell type-specific manner. Still, the general consensus is that another unknown cytosolic DNA-recognition system, independent of the TLRs and RIG-I, may exist.

Further studies to elucidate the complex mechanisms of cytosolic DNA recognition may help the development of new strategies to treat inflammatory diseases.