Cytosolic DNA Sensors (CDSs): a STING in the tail 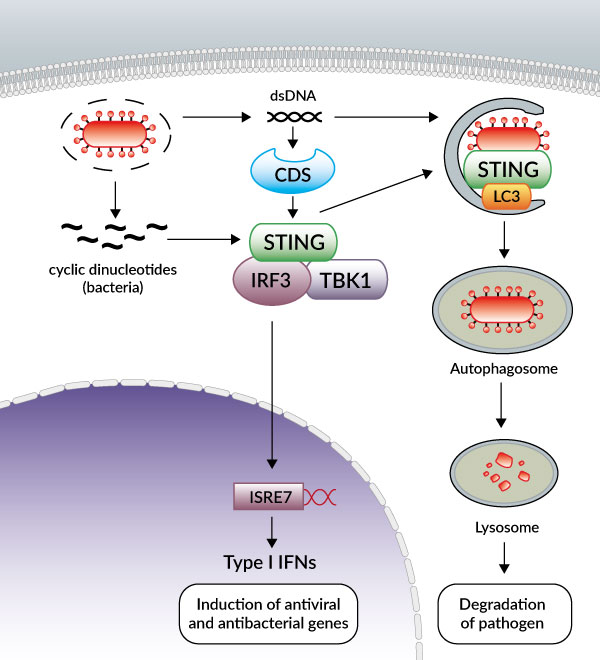 The innate immune system provides the first line of defense against infectious pathogens and serves to limit their early proliferation. It is also vital in priming and activating the adaptive immune system.

Innate immune detection of intracellular DNA derived from viruses and invasive bacteria is important to initiate an effective protective response. This crucial step depends on cytosolic DNA sensors (CDSs), which upon activation trigger the production of type I interferons (IFNs) and the induction of IFN-responsive genes and proinflammatory chemokines.
Although the identity of these CDSs is not fully uncovered, much progress has been made in understanding the signaling pathways triggered by these sensors.

Recently, a new molecule, STING (stimulator of IFN genes), has been shown to be essential for the TBK1-IRF3- dependent induction of IFN-β by transfected DNA ligands and intracellular DNA produced by pathogens after infection [2, 3].
STING (also known as MITA, MPYS and ERIS) is a transmembrane protein that resides in the endoplasmic reticulum (ER) [2-6]. In response to cytosolic DNA, STING forms dimers and translocates from the ER to the Golgi then to punctate cytosolic structures where it colocalizes with TBK-1, leading to the phosphorylation of IRF3.
How STING stimulates TBK1-dependent IRF3 activation was recently elucidated by Tanaka and Chen. They found that, upon cytosolic DNA sensing, the C-terminal tail of STING acts as a scaffold protein to promote the phosphorylation of IRF3 by TBK1 [7].

STING in the host response to intracellular pathogens. Linking type I IFN response and autophagy for better defense

Until very recently, STING in addition to its role as an adaptor protein was also thought to function as a sensor of cyclic dinucleotides.
Burdette et al. first demonstrated that STING binds directly to the bacterial molecule cyclic diguanylate monophosphate (c-di-GMP) [8]. This finding was confirmed by several teams who examined the structure of STING bound to c-di-GMP [9-11], including Cheng and colleagues, however their data suggest that STING is not the primary sensor of c-di-GMP [12]. Rather, they indicate that DDX41, an identified CDS, functions as a direct receptor for cyclic dinucleotides upstream of STING. The authors hypothesized that DDX41 binds to c-di-GMP then forms a complex with STING to activate the IFN response.

Exciting new developments reveal that STING participates in another aspect of innate immunity, autophagy.
Autophagy plays a critical role in host defense responses to pathogens by promoting the elimination of microbes that enter into the cytosol by their sequestration into autophagosomes and their delivery to the lysosome. 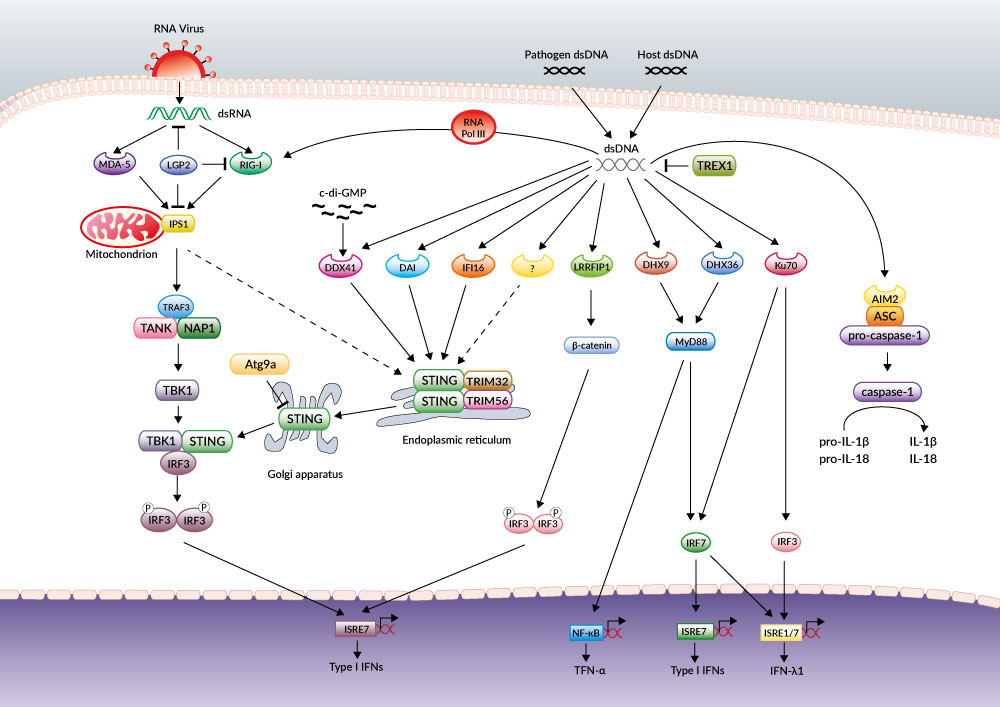 Recent studies have reported that DNA viruses and intracellular bacteria induce autophagy and that this process is dependent on cytosolic genomic DNA and STING [13-15]. Robust induction of autophagy was also observed after transfection of various double stranded (ds) DNA species, such as poly(dA:dT), poly(dG:dC) or plasmid DNA, but not single stranded (ss) DNA, dsRNA or ssRNA [16].

Interestingly, activated STING was shown to relocate to unidentified membrame-bound compartments where it colocalizes with LC3, a hallmark of autophagy, and ATg9a. The latter protein was reported to regulate the interaction between STING and TBK1 after dsDNA stimulation [16]. The E3 ubiquitin ligases TRIM56 and TRIM32
were also found to regulate STING by mediating its dimerization through K63-linked ubiquitination [17, 18].

Several cytosolic DNA sensors upstream of STING have been proposed.
DNA-dependent activator of IRFs (DAI) was the first CDS discovered based on the ability of transfected poly(dA:dT) to induce IFN-β [19]. However, the role of DAI has been shown to be very cell-type specific and cells derived from DAI-deficient mice responded normally to dsDNA ligands [20].

AIM2 is a STING-independent cytosolic DNA sensor that forms an inflammasome with ASC to trigger caspase-1 activation and the secretion of the proinflammatory cytokines IL-1β and IL-18 [20].

Members of the DExD/H-box helicase superfamily have also been reported to function as cytosolic DNA sensors. While DHX36 and DHX9 were identified as STING-independent but MyD88-dependent sensors of CpG-containing DNA in plasmacytoid dendritic cells, DDX41 was found to bind various dsDNA ligands and localize with STING to promote IFN-β expression [22]. Other CDSs have been reported to function independently of STING: RNA Pol III, LRRFIP1 and Ku70 [20].

Unlike cytosolic RNA sensors (RIG-I, MDA-5), which detect structural moieties specific to pathogen RNA, such as 5’-triphosphates, it is not clear whether cytosolic DNA sensors can recognize any particular structural motif of DNA that would discriminate between self and non-self. This suggests that CDSs may have a role not only in anti-microbial innate immune responses but also in autoimmunity. A multitude of CDSs have been described but whether they are all true receptors remains an open question.