Notification: Our anti-mouse IL-28B antibody raised in mice and produced in hybridoma (mabg-mil28b/mabg-mil28b-5) has been removed from our catalog. Its coding sequence has been determined and the antibody is now produced by recombinant technology and purified from CHO cells. 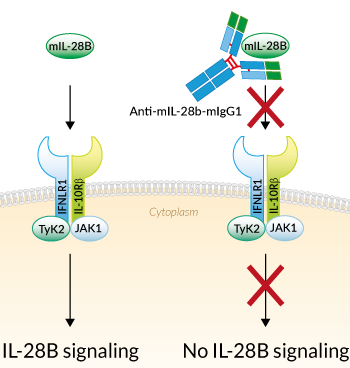 The sequence of the anti-mIL-28b-mIgG1 is 100% murine (constant and variable regions), as the original clone (clone 3C11) was raised in mice using a proprietary method. This feature allows for reduced immunogenicity and risks of fatal hypersensitivity reactions upon repeated mAb injections into mice [2-4].

All InvivoFit™ products are handled in a clean room, filter-sterilized, and tested for bacterial contaminants. Additionally, this grade guarantees a low levels of endotoxins (<1 EU/ml). The buffer formulation is specifically adapted for in vivo studies.

Anti-mIL-28b-mIgG1 is designed to efficiently neutralize the biological activity of mIL-28B. Interleukin 28B (IL-28B) is a member of the type III interferon (IFN) family,  that exhibits several common features with type I IFNs: antiviral and antitumor activity [5,6].

Formulation of Anti-mIL-28b-mIgG1: Lyophilized from 0.2 µm filtered solution in a sodium phosphate buffer with glycine, saccharose, and stabilizing agents

Formulation of Anti-mIL-28b-mIgG1 InvivoFit™: Lyophilized from 0.2 µm filtered solution in a sodium phosphate buffer with 5% saccharose

Lyophilized product is stable for at least 1 year.

InvivoFit™ is a high-quality standard specifically adapted to in vivo studies. InvivoFit™ products are filter-sterilized (0.2 µm) and filled under strict aseptic conditions in a clean room. The level of bacterial contaminants (endotoxins and lipoproteins) in each lot is verified using a LAL assay and a TLR2 and TLR4 reporter assay.

Upon infection, viral RNA is sensed by pattern-recognition receptors (PRRs) including RIG-I and MDA5 [3]. This stimulates the transcription of IFN-λs by IRF1 (IFN regulatory factor 1). Subsequently, IFN-λs bind to a heterodimeric receptor formed by the assembly of IFNLR1 (IFN-lambda receptor 1) and IL10Rβ (IL-10 receptor β). This leads to the recruitment of the Janus kinases, JAK1 and TyK2, and phosphorylation of STAT1 and STAT2. They dimerize and interact with IRF9, forming the so-called ISGF3 complex. ISGF3 translocates into the nucleus and binds to IFN-stimulated response elements (ISRE) within the promoter region of antiviral IFN-stimulated genes (ISG) to regulate their expression [2-3]. Besides its antiviral function, IFN-λ signaling plays also an important role in non-infectious diseases like inflammatory bowel disease and cancer [2].