Naturally secreted forms of luciferases from marine bioluminescent organisms have been known for over 100
years, although their identification is relatively recent. The first secreted luciferase to be cloned was isolated from the marine ostracod crustacean, Vargula hilgendorfii, formerly known as Cypridina hilgendorfii, of the Cypridinidae family [1].
Later, secreted luciferases were isolated from luminous glands of marine copepod crustaceans Gaussia princeps [2], Metridia longa [3] and Metridia pacifica [4] of the Metridinidae family.
Earlier this year, newly identified secreted luciferases were cloned from copepods of Heterorhabdidae, Lucicutiidae and Augaptilidae families, isolated from Zooplankton collected off the deep sea of Japan  [5].
The secreted copepod luciferases were functionally tested, and sequence alignment of the genes revealed a high degree of similarity in the primary structure. Copepod luciferases share two catalytic domains, D1 and D2, and an amino-terminal signal sequence.

Conveniently, when expressed in mammalian or insect cells, the native signal sequences of these luciferases are functionally active, mediating their export from within the cell to the surrounding culture medium. Bioluminescence assays are simply conducted using culture media, whereupon the activity of the secreted luciferases provides a readout of the biological signaling event under study. This aspect together with the strong intensity of bioluminescent signal generated, make secreted luciferases appealing for the design of novel reporter genes with enhanced properties [6-8]. Applications of secreted luciferases extend beyond their use as in vitro cell biological reporters, and can be adapted for real-time ex vivo monitoring of in vivo biological processes [9-11].

A major challenge in the use of cell-based assays is establishing cell lines that reliably express a reporter gene without experiencing diminishing expression with increasing passages. Expression of the Lucia luciferase gene is designed for stable expression providing reliability and biological significance between experiments. 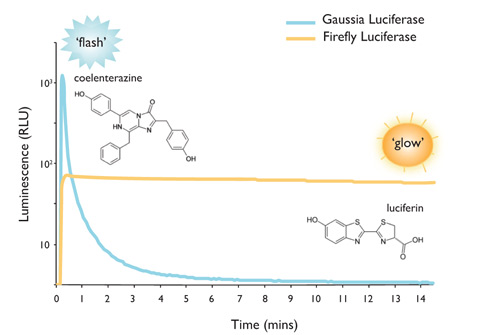 The phenomenon of bioluminescence is the emission of visible light produced when luciferases catalyze the oxidation of specific substrates. Substrates of luciferases can be broadly classed into two groups; luciferins and
coelenterazines.

Luciferases, such as firefly, that use luciferin or derivatives as substrates require ATP and Mg2+ as cofactors and display stable “glow” kinetics. The light emitted is generally in the green-yellow region of the visible light spectrum.

Conversely, luciferases using coelenterazine do not require ATP for activity and produce a rapid, often intense, “flash” light. Renilla luciferase along with the secreted copepod luciferases known to date display substrate specificity toward coelenterazine. The coelenterazine-utilizing luciferases emit visible blue light with a wavelength between 465-493 nm.

Coelenterazine, as a molecule, is unstable with respect to its auto-oxidation potential. Spontaneously, coelenterazine is oxidized to coelenteramide yielding the visible blue light and release of carbon dioxide. A number of variants and synthetic analogs have been used to improve stability by preventing autooxidation, in order to reduce background signal during assaying [12].

InvivoGen’s QUANTI-Luc™ is a one-step detection reagent paired for use with Lucia luciferase. QUANTI-Luc™ contains coelenterazine with stabilizing agents that limits substrate auto-oxidation and allows for the reconstituted reagent to be stored.
When used in combination with Lucia luciferase, the bioluminescent flash signal generated is longer-lasting, providing flexibility for taking readings.