SARS-CoV-2 (severe acute respiratory syndrome coronavirus-2), the causative agent of COVID-19, was first reported in Wuhan (China) and has rapidly disseminated around the globe [1]. Only one year after the pandemic outbreak, scientists have developed efficient vaccines and promising therapeutic interventions, such as monoclonal antibodies (mAbs). However, SARS-CoV-2 variants exhibiting increased transmission have emerged. Some are raising concern as they might develop resistance to natural immunity and therapies [2]. The escalating number of "variants of concern" may jeopardize worldwide control of the disease. The race is on: epidemiologists and immunologists are working hand-in-hand to detect, track, and predict SARS-CoV-2 mutations for adjusted countermeasures.

SARS-CoV-2 variants are defined as viruses accumulating mutations, including single nucleotide polymorphisms (SNPs), that confer them with a selection advantage such as higher infectivity within the host and transmissibility between hosts [3]. Variants of concern are defined as viruses that have acquired antigenic changes altering the immune response and/or drug efficacy. Genome sequencing allows visualization of the virus's ongoing evolution. While mutations have been reported throughout the SARS-CoV-2 genome, the most concerning ones have occurred in the Spike (S) encoding gene.

The Wuhan-Hu D614 isolate/strain was the first described early in the pandemic, in December 2019 [1] and belongs to clade 19A. In 2020, over 20,000 mutations and some insertions/deletions have been detected in SARS-CoV-2 strains. In April 2020, the original variant was globally replaced by the D614G variant (clade 20) [4]. The D614G variant has since developed numerous mutations allowing increased transmission of the virus. Clusters of the D614G variant have occurred in specific geographical areas, before spreading around the globe. These new variants are often named after the country they first appeared in (e.g. United-Kingdom (U.K) variant, South-Africa (S.A) variant, Brazil (BRA) variant, and California (CAL; USA).

The terminology of viral variation can be confusing as scientists often use the terms variant, strain, and lineage interchangeably. In a virus phylogenetic tree, a new variant emerges when specific (sets of) mutations are selected. If these mutations produce a virus with distinct phenotypic characteristics, the variant is co-termed a strain. A lineage, or clade, is a phylogenetic cluster of variants associated with an epidemiological event (i.e. rapid geographical spread). Although efforts are being made to meet a standardized nomenclature for new variants [8], the two most cited platforms sharing SARS-CoV-2 genomes, Nextstrain and PANGO, use a distinct terminology. For more clarity, we hereby use the term variant with the Nextstrain nomenclature. The PANGO lineage equivalent is mentioned in brackets.

Mutations of concern in the Spike protein 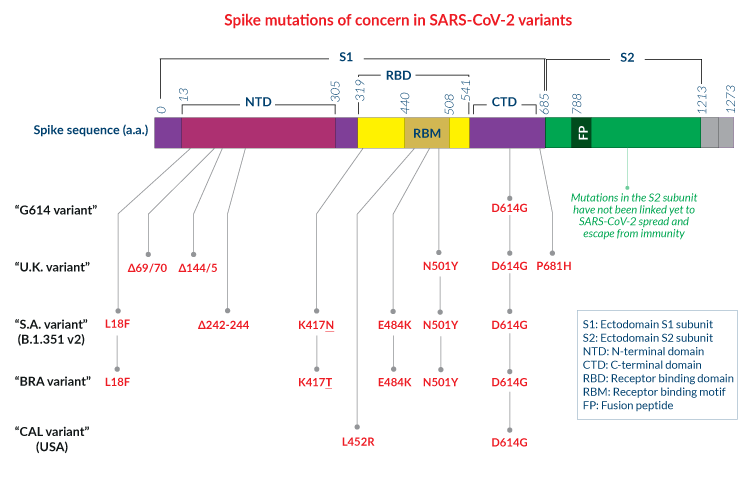 SARS-CoV-2 Spike protein is assembled at the virus membrane as a clove-shaped trimer. Each protomer's ectodomain contains two subunits, S1 and S2. The S1 portion is implicated in viral attachment to the target cell. S1 is comprised of the N-terminal domain (NTD), the ACE2 receptor-binding domain (RBD), and the C-terminal domain (CTD). NTD and RBD are two superantigenic regions, within which mutations have been found to impact both infectivity and immunity. The S2 portion contains elements, such as the fusion peptide (FP), that are critical for viral genome delivery into the target cytosol. To date, mutations in the S2 subunit have not been linked to the virus's spread, nor escape from immunity.

Mutations in Spike RBD and S1-CTD:

Mutations in Spike S1-NTD:
The NTD of the SARS-CoV-2 Spike protein is the least conserved domain [20]. Several substitutions and deletions are found within this region. Notably, 90% of the deletions in Spike occur in four regions within the NTD that are named "recurrent deletion regions" (RDR1 to RDR4) [21]. These RDRs cover external surfaces containing antibody epitopes and therefore contribute to SARS-CoV-2 resistance to neutralizing antibodies [21].

Owing to its proofreading mechanism, SARS-CoV-2 exhibits a low mutation rate compared to the Influenza virus. However, the emergence of variants is raising concerns that immunity developed in COVID-19 recovered patients and vaccinated individuals could become obsolete as the virus mutates. Our SARS-CoV-2 understanding is still ongoing. To keep up with and confront the evolving virus, chasing emerging variants will not suffice. Scientists also need to scrutinize the current variants' overall impact on immunity within populations. Which vaccination method elicits the most robust immunity to prevent re-infection with another variant? What information can we get from convalescent patients who went through mild and severe disease? To answer these questions, antibodies from infected and vaccinated individuals could be screened for SARS-CoV-2 neutralization, using flow-cytometry detection and cellular fusion assays.

To help you study the impact of SARS-CoV-2 variants, InvivoGen offers:

➤ Plasmids harboring the genes encoding SARS-CoV-2 Spike. These ready-to-go vectors have been designed for mammalian cell expression or protein production and secretion.
➤ Cell lines derived from the human embryonic kidney 293 (HEK-293) or the human A549 lung carcinoma cell lines. They have been specifically designed to study SARS-CoV-2 infection, as well as for the development of novel therapeutics.
➤ Fusion proteins consisting of Spike fragments with a C-terminal poly-histidine or human IgG1 Fc tag.
➤ Antibodies targeting the SARS-CoV-2 Spike RBD. These antibodies are available with different immunoglobulin isotypes, either native or engineered.