Toll-like receptor 9 (TLR9) senses unmethylated CpG dinucleotides, a hallmark of microbial DNA, that can be mimicked by synthetic oligonucleotides containing CpG motifs (CpG ODNs).
TLR9 stimulation by CpG DNA or CpG ODNs triggers intracellular signaling leading to the activation of macrophages, dendritic cells (DC) and B cells, and the production of cytokines, chemokines, and immunoglobulins. Subsequently, cytokines produced by DC, such as IL-12, induce the differentiation of naive T cells into T helper 1 (Th1) and cytotoxic T-cells (CTL). 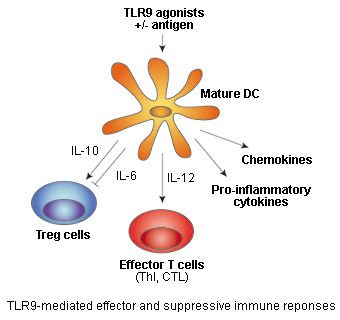 Therefore, TLR9 agonists can elicit innate immune defenses and antigen T-cell specific responses, a property that underlines their development as vaccine adjuvants or immunotherapeutics for infectious diseases and cancer.
Studies in animal models have demonstrated that the immune defenses mounted by CpG ODNs alone or as vaccine adjuvants can protect against a variety of viral, bacterial, and parasitic diseases [1]. Promising results in the prophylactic treatment of hepatitis B have been obtained from phase III trials with a combination of a CpG ODN and hepatitis B surface antigen (Heplisav) [2].

Antitumor activity of CpG ODNs has also been established in numerous mouse models. Encouraging results in the treatment of cancers have come from phase I and II clinical trials using CpG ODNs as a tumor vaccine adjuvant, monotherapy, or in combination with chemotherapy [2].
However, there have been also some disappointing results with one pharmaceutical company recently dropping its clinical program with a TLR9 agonist in non-small cell lung cancer. The interim data of two phase 3 trials of PF-3512676 (formerly called CpG 2006) showed that it failed to improve the clinical outcomes compared to chemotherapy alone [2].

A major obstacle to the development of effective immunotherapeuties to cancer is the immunosuppressive environment of the tumor. Indeed, tumors secrete a range of molecules that inhibit effector immune responses but also induce immune cells that have suppressive activity such as regulatory T (Treg) cells.
TLR agonists, including CpG ODNs, have been shown to break tolerance to self-antigens by inhibiting the function of Treg cells via the production of IL-6 by DC [3]. However, CpG ODNs have also been shown to stimulate the production of IL-10 by DC, and promote the induction of Treg cells. Therefore, CpG ODNs can generate effector as well as suppressive immune responses.
Jarnicky et al. have demonstrated that the immunosuppressive arm of CpG ODN-induced TLR activation can be selectively blocked by inhibition of p38 MAPK, an intermediate in the IL-10 production by DC [4]. Incubation of CpG-ODN-activated Ag-pulsed DC with SB203580 suppressed their ability to generate Treg cells while enhancing the induction of Th1 cells.

Recent reports indicate that TLR9 may play a role in the pathogenesis of various autoimmune diseases, such as systemic lupus erythematosus (SLE). Under certain conditions,TLR9 is able to recognize self-DNA leading to the production of anti-DNA autoantibodies.
This discovery has prompted the development of specific inhibitors of TLR9. Paralleling the approach of stimulating TLR9 with CpG ODNs, it was found that suppressive ODNs exist that are able to inhibit TLR9 activation.The most potent inhibitory sequences contain TTAGGG multimers found in mammalian telomeres or a 5’ CCT, a C-free linker four to five bases long, and a GGG(G) tail. Some of these suppressive ODNs are able to inhibit an already ongoing immune response and therefore could be useful in the treatment of SLE [5].

This data illustrate the great potential of TLR9-based drugs for the treatment of infectious diseases, cancer and autoimmune diseases. However, as they can activate both the effector and suppressive arms of the immune system, more studies are needed to better understand the mechanisms involved allowing the development of safer and more effective TLR therapeutics.