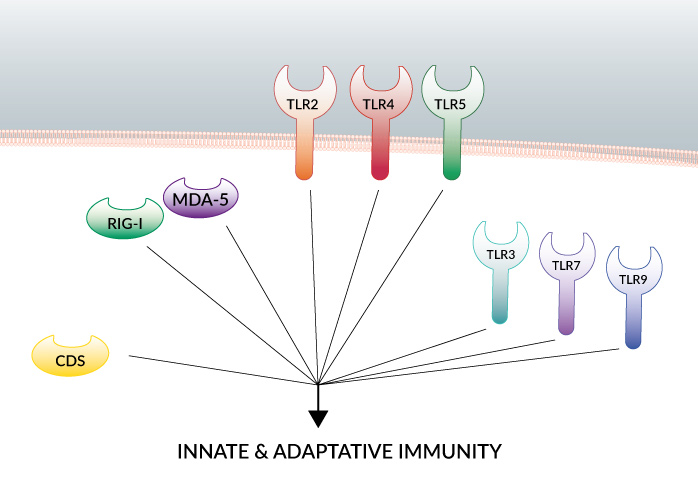 Toll-like receptors (TLRs) are the best studied pattern recognition receptors (PRRs) and their importance in stimulating innate and adaptive immunity is now well established.
TLRs are sensors of microbial components as well as host-derived endogenous molecules released by injured tissues. TLRs play a critical role in defense against invading pathogens but are also involved in other serious pathological processes, such as tumorigenesis [1]. In view of this, TLR agonists have great potential as immunotherapeutics or vaccine adjuvants for the treatment of infectious diseases, cancer and autoimmune diseases.

One of the most successful empiric vaccines ever developed, the live attenuated yellow fever vaccine YF-17D, activates immune cells via multiple TLRs [2]. In the same line, microbial products, such as Coley’s toxin (a mixture of killed Streptococcus pyogenes and Serratia marcescens bacteria) and Bacille Calmette-Guérin (BCG, an attenuated strain of Mycobacterium bovis), which have been used as anticancer agents with some success, induce the host immune system through the activation of several TLRs. Studies have demonstrated that YF-17D and BCG efficacy requires a Th1 cytokine response which promotes antigen-specific cytotoxic T cells [2, 3]. 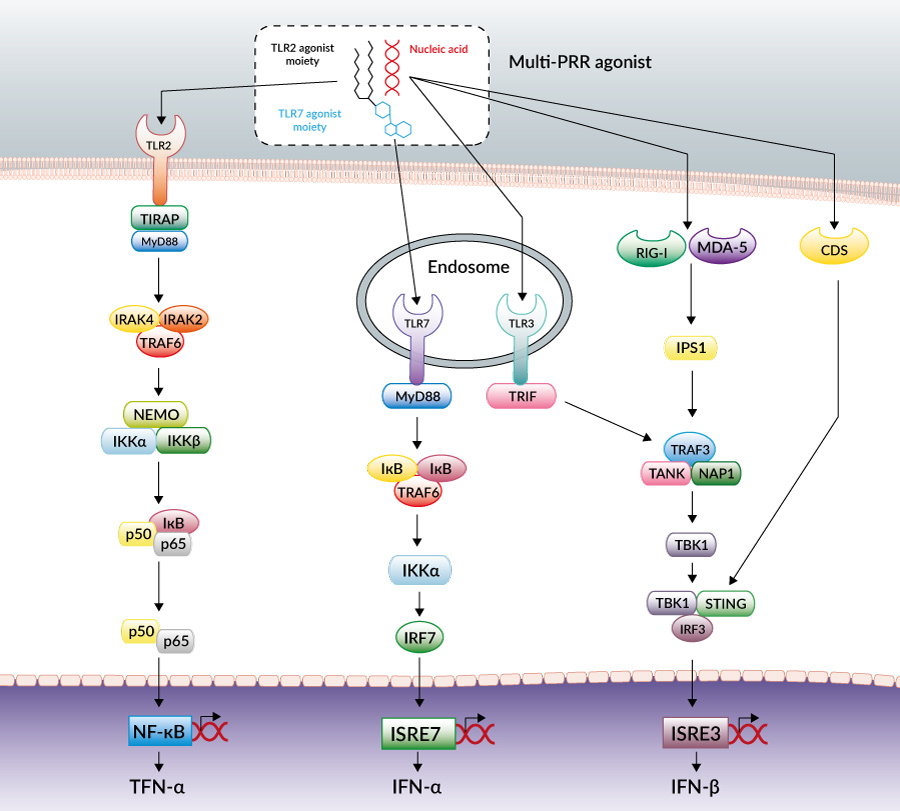 Given that TLRs are expressed in different cellular compartments, by different cell types and that they trigger different signaling pathways, combining TLR agonists can act in synergy to promote Th1-type immunity. Encouraging clinical results have been reported with the combination of BCG and the TLR7 agonist Imiquimod in melanoma patients [7]. Furthermore, vaccination studies have demonstrated that the combination of Imiquimod and MPL, a TLR4 ligand, elicits synergistic increases in antigen-specific neutralizing antibodies compared to a single TLR ligand [8].

The combination of TLR agonists with agonists for other PRRs, such as the sensors of nucleic acids RIG-I/MDA-5, IFI16 and cGAS, may further enhance the immune response against cancer and infectious diseases.
With this perspective, InvivoGen has developed multi-PRR agonists that activate TLR2 and/or TLR7 and can complex nucleic acids, such as double-stranded DNA, leading to additional recognition by cytosolic DNA sensors (CDSs). These molecules have been shown to induce a strong immune response in a murine melanoma cancer model and in vaccination studies.

By mimicking the potent natural immuno-stimuli that are viruses and bacteria, multi-PRR ligands represent an interesting new class of agents in cancer immunotherapy or vaccination. However, further studies are needed to develop the best PRR agonist combinations for a given application.