CpGs and the Immune Response

Bacterial DNA is rich in unmethylated 2’-deoxyribo (cytidine-phosphateguanosine) (CpG) dinucleotides, in contrast to mammalian DNA which contains a low frequency of CpG dinucleotides that are mostly methylated.
Unmethylated CpGs in specific sequence contexts activate the vertebrate immune system via Toll-Like Receptor (TLR) 9. TLR9 recognizes CpG DNA and initiates a signaling cascade leading to the production of proinflammatory cytokines such as IL-6 and IL-12 [1].
Plasmids used for in vivo experiments are produced in E. coli and therefore their CpGs are unmethylated and induce immune responses through this host defense mechanism, which represents a limitation for the clinical development of DNA vaccines and gene therapy vectors.

A major limitation of gene delivery vectors for gene therapy applications is the rapid decline of transgene expression in vivo. Methylation of CpG dinucleotides within the promoter is a major factor limiting long-lasting gene expression.
Indeed, the transcriptional activity of the widely used and CpG-rich cytomegalovirus immediate early gene promoter (CMV) is highly robust but prone to inactivation within a few weeks [2]. Replacement of the CMV promoter with a cellular promoter combined with the use of a CpG-reduced backbone was shown by our team and other labs to increase the duration of expression and lower the inflammatory response [3, 4].
Recently, CpGs in plasmid DNA (pDNA) were found to enhance the clearance of PEG-coated pDNA-lipoplexes, a phenomenon that could be reduced by the use of CpG-free pDNA allowing repeated dosing [5].

InvivoGen has developed a new family of plasmids that are completely devoid of CpG dinucleotides, named pCpGfree. pCpGfree plasmids contain elements that either naturally lack CpG dinucleotides, were modified to remove all CpGs, or entirely synthesized such as genes encoding selectable markers or reporters. These plasmids yield high levels of transgene expression both in vitro and in vivo, and in contrast to CMV-based plasmids allow sustained expression in vivo [6].

A major application of CpG-free plasmids is the treatment of inherited diseases cause by a single gene defect, such as cystic fibrosis and hemophilia, through gene therapy. Hyde et al. have reported promising results for the treatment of cystic fibrosis using a pCpGfree-derived plasmid [4]. They show that a CpG-free pDNA can achieve sustained lung transgene expression in contrast to a pDNA containing even a single CpG. These results have led to a clinical trial that has started in February 2009. 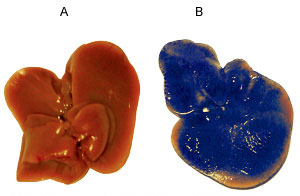 LacZ expression using a pCpGfree plasmid. C57Bl6 mice were injected with 30 μg pCpGfree-mcs (A) or pCpGfree-LacZ (B) plasmids using hydrodynamic delivery. The livers were harvested 4 days post-inoculation and stained to determine the expression of the CpG-free LacZ gene.