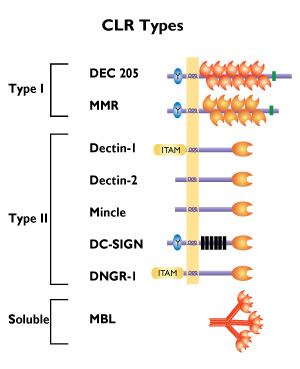 C-type lectin receptors (CLRs) comprise a large family of receptors that bind to carbohydrates in a calcium-dependent manner.
The lectin activity of these receptors is mediated by conserved carbohydrate-recognition domains (CRDs).
On the basis of their molecular structure, two groups of membrane-bound CLRs can be distinguished and a group of soluble CLRs.

These receptors are involved in fungal recognition and the modulation of the innate immune response.

Soluble CLRs include MBL, an oligermeric protein that binds an array of carbohydrate patterns on pathogen surfaces.

CLRs are expressed by most cell types including macrophages and dendritic cells (DCs), which phagocytoze various glycoproteins and microbes for the purposes of clearance and antigen presentation to T lymphocytes. 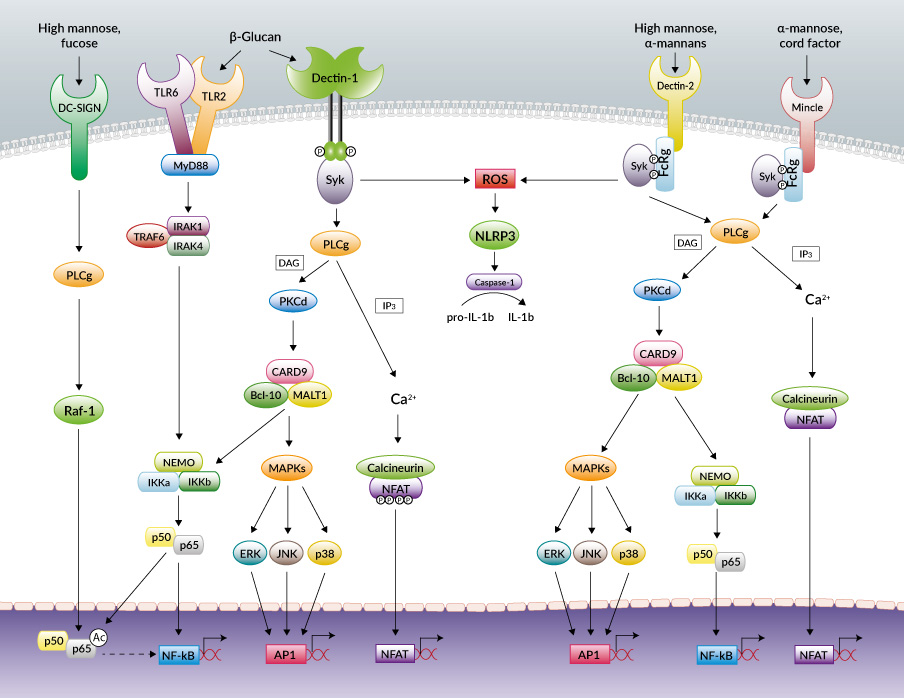 Dectin-1 plays an important role in antifungal innate immunity. Dectin-1 is a specific receptor for β-glucans [1].

β-glucans are glucose polymers found in the cell walls of fungi, including the yeasts Saccharomyces cerevisiae and Candida albicans. Dectin-1 has CRD connected by a stalk to the transmembrane region, followed by a cytoplasmic tail containing an ITAM-like motif.

Upon binding to its ligand, Dectin-1 triggers phagocytosis and activation of Src and Syk kinases, through its ITAM-like motif.
Syk, in turn, induces the CARD9-Bcl10-Malt1 complex leading to the production of reactive oxygen species (ROS), activation of NF-κB and subsequent secretion of proinflammatory cytokines [2, 3].
ROS have a direct microbicidal role in the phagosome but also can affect IL-1β secretion by activating the NLRP3 inflammasome, which in turn activates caspase-1 and permits processing of pro-IL-1β [4].

Dectin-1 signaling has been shown to collaborate with TLR2 signaling to enhance the responses triggered by each receptor [3, 5]. Furthermore, Dectin-1 can modulate cytokine expression by inducing NFAT through the Ca2+-calcineurin-NFAT pathway [6].

Dectin-2 binds high mannose-type carbohydrates and was shown to be the functional receptor for α-mannans. Moreover, Dectin-2 has been implicated in anti-bacterial immunity and allergy [7].

Like Dectin-1, Dectin-2 belongs to the selective group of CLRs that link pathogen recognition to adaptive immunity. In fact, it has been demonstrated that Dectin-2 is the predominant receptor in response to fungal infection and the induction of Th17 immunity.

Similar to Dectin-1, activation of Dectin-2 triggers ROS and potassium efflux, leading to NLRP3 inflammasome activation and processing of pro-IL-1β [8].

Mincle is a member of the Dectin-2 family.

Mincle recognizes a variety of exogenous and endogenous stimuli, such as mycobacteria, certain fungi and necrotic cells [9, 10].
Exogenous ligands for Mincle include fungal α-mannose, and the mycobacterial glycolipid, trehalose-6’6’-dimycolate (TDM), also known as cord factor the immunostimulatory component of Mycobacterium tuberculosis [11].
Furthermore, Mincle senses damaged cells by recognizing the endogenous damage-associated molecular patterns (DAMPs). One such DAMP identified is the spliceosome-associated protein 130 (SAP130), a soluble factor released by necrotic cells [12].

Mincle interacts with the Fc receptor common γ-chain (FcRγ), which triggers intracellular signaling through Syk leading to CARD9-dependent NF-κB activation. Syk induces also the mobilization of intracellular calcium (Ca2+) and the activation of the calcineurin-NFAT pathway.

DC-SIGN is of interest due to its involvement in the recognition of several viruses (HIV-1, HCV, dengue virus, CMV, ebola virus) and other microbes of the Leishmania and Candida species.

This type II transmembrane protein has a single C-type lectin domain and is expressed on immature monocyte-derived DCs. DC-SIGN modulates TLR signaling at the level of the transcription factor NF-κB, however, prior TLR activation of NF-κB is required.

It has been demonstrated that pathogens trigger DC-SIGN on human DCs to activate the serine and threonine kinase Raf-1, which subsequently leads to acetylation of the NF-κB subunit p65.
Acetylation of p65 both prolonged and increased IL-10 transcription to enhance the anti-inflammatory cytokine response [13].

To date, it has been shown that M. tuberculosis, M. leprae, C. albicans, measles virus, and HIV-1 interact with DC-SIGN to activate the Raf-1-acetylation-dependent signaling pathway and modulate TLR signaling [14]. Thus, this pathway is involved in regulation of adaptive immunity by DCs to bacterial, fungal, and viral pathogens.

DNGR-1 (CLEC9A) is particularly interesting because of its restricted pattern of expression in DCs that may be exploited for cancer therapy.

It has recently been revealed that DNGR-1 binds damaged or dead cells via exposed actin filaments [15,16]. DNGR-1 is therefore considered to be DAMPs receptor since no microbial ligand has yet been identified.

MBL binds to repetitive mannose and/or N-acetylglucosamine residues on microorganisms, leading to opsonization and activation of the lectin complement pathway.

MBL also interacts with carbohydrates on the glycoprotein (gp)120 of HIV-1. MBL may inhibit DC-SIGN-mediated uptake and spread of HIV [18].

Much remains to be understood about CLRs in general, their ligands and and cooperation with other molecules.