Unexpectedly, the next candidate receptor was the RNA helicase retinoic acid-inducible gene-I (RIG-I), an RNA-binding and not DNA-binding protein. A human cell line deficient for RIG-I was shown to lack the ability to recognize poly(dA:dT) [3].
Recently, two independent teams confirmed the involvement of RIG-I in the response to dsDNA and demonstrated that rather than the cytosolic DNA, an RNA intermediate was responsible for RIG-I activation. They found that transfected poly(dA:dT) is transcribed by RNA polymerase III in the cytoplasm and potentially in the nucleus into a double-stranded RNA intermediate. This dsRNA molecule contains a 5’-triphosphate moiety and is recognized by RIG-I [4, 5]. 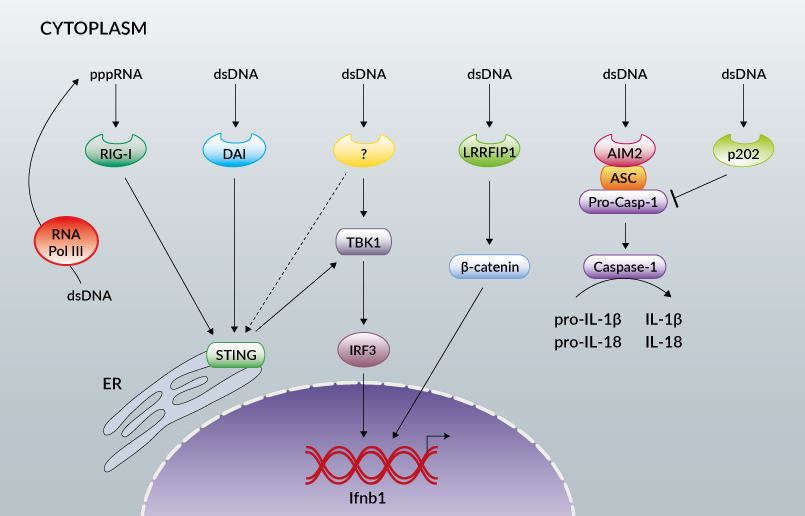 Both DAI and RIG-I induce the production of type I IFNs through the TBK1/IRF3 pathway.
The endoplasmic reticulum (ER)-resident transmembrane protein stimulator of IFN genes (STING) is a key component of this pathway [6]. STING seems to function as an adaptor protein upstream of TBK1.

Recently, a third IFN-inducer cytosolic dsDNA sensor has been identified [7]. This sensor LRRFIP1 can recognize AT-rich B-form dsDNA as well as GC-rich Z-form dsDNA.
With the use of LRRFIP1-specific siRNA, Yang et al. demonstrated that LRRFIP1 triggers the production of IFN-β in a β-catenin-dependent manner. β-Catenin binds to the C-terminal domain of IRF3 inducing an increase in IFN-β expression.

Although the production of type I IFNs is the main pathway induced by cytosolic dsDNA, production of the pro-inflammatory cytokines IL-1β and IL-18 has also been observed. Recently, several groups have identify AIM2 (absent in melanoma 2), a member of the hematopoietic interferon-inducible nuclear protein HIN-200 family, as a cytosolic dsDNA sensor which activation promotes the assembly of an inflammasome [8-10]. DNA of various  origins, such as poly(dA:dT), plasmidic DNA and DNA from the bacterium L. monocytogenes have been shown to activate AIM2 [11]. Upon activation, AIM2 interacts with ASC, a common adapter of the inflammasomes, leading to the cleavage of caspase-1 and the secretion of IL-1β and IL-18.
p202 is another member of the HIN200 family shown to bind cytoplasmic dsDNA but, in contrast to AIM2, it  represses caspase activation [12].

The recognition of cytosolic DNA is more complicated than first anticipated. Several sensors have been identified that trigger different signaling pathways in a cell type-specific manner. Still, the general consensus is that another unknown cytosolic DNA-recognition system , independent of the TLRs and RIG-I, may exist. Further studies to elucidate the complex mechanisms of cytosolic DNA recognition may help the development of new strategies to treat inflammatory diseases.