Toll-like receptors (TLRs) are essential for the recognition of microbial pathogens. A subset of TLRs, TLR3, TLR7/8, and TLR9, is involved in antiviral responses by triggering the production of antiviral cytokines such as type I interferons (IFNs). TLR3 responds to double stranded RNA, a replication intermediary for many viruses. TLR7/8 recognize viral single-stranded RNAs, whereas TLR9 recognizes unmethylated CpG motifs within viral DNA[1]. 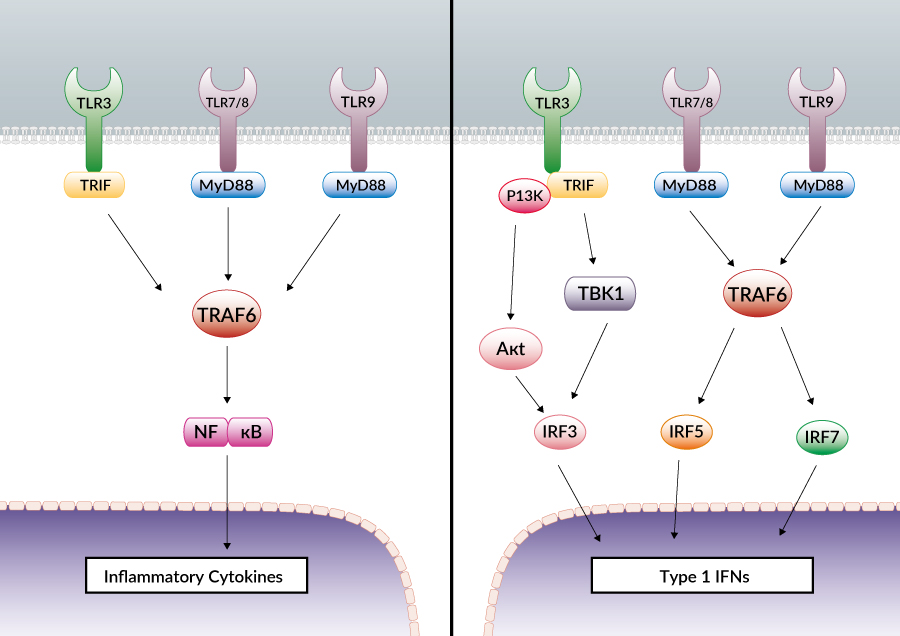 Expression of type I IFNs (IFNα/β) is regulated by at least three families of transcription factors: c-jun/ATF-2, NF-κB and the IFN regulatory factors (IRFs). IFN promoter contains IRF3, IRF5 and IRF7 binding sites while IFNβ promoter has mainly IRF3 and IRF7 binding sites. In unstimulated cells, IRFs reside in the cytoplasm at low levels in an inactive form. Upon viral infection their production is enhanced, followed by their activation by phosphorylation allowing them to translocate to the nucleus. Activated IRFs form homo- or heterodimers: IRF3/IRF5 and IRF3/IRF7 heterodimers are active while the IRF5/IRF7 heterodimer is inactive and acts as a repressor of IFNα/β expression[2].

TLRs involved in virus recognition are expressed on endosomal membranes and can be separated according to their requirement for the adaptor protein MyD88: TLR3 activity is MyD88-independent while TLR7/8/9 depend on MyD88. These two families mobilize a different set of adaptor molecules to activate different IRFs. Upon stimulation, TLR3 recruits TRIF which in turn activates TBK1 and/or IKKε, two IKK-related kinases responsible for IRF3 activation by phosphorylation. The full activation of IRF3 requires the recruitment by TLR3 of an additional kinase, PI3 kinase, which interacts with a second kinase, Akt[3]. TLR7/8/9 use MyD88 to mobilize the signaling proteins TRAF6 and IRAK4 leading to the activation of IRF7[4]. Recent data suggest that IRF3 can be activated independently of TLR3 through two cytoplasmic RNA helicases: RIG-I and mda5[5]. These helicases might be connected through their CARD domain to the death domain containing proteins FADD and RIP1 resulting in TBK1 induced activation of IRF3[6].

Interestingly, the contact between a virus and a TLR-expressing cell is often sufficient to induce type I IFN production without need for infection, allowing uninfected cells to participate in the antiviral responses[2]. This feature can be exploited to study virus-recognizing TLRs by mimicking virus-TLR interactions using synthetic ligands such as poly(I:C) (TLR3 ligand), ssRNA40 (TLR7/8 ligand) or CpG ODNs (TLR9 ligands). To facilitate your discoveries in this area, Invivogen offers a large selection of such ligands as well as an expanding collection of genes involved in these signaling pathways.