The mucosal surfaces represent the largest area of exposure of the body to external pathogens. Immunoglobulin A (IgA), in its secretory form, is the main effector of the mucosal immune system and provides an important first line of defense against most pathogens that invade the body at a mucosal surface [1].
Secretory IgA (SIgA) represents the most abundant immunoglobulin of body secretions such as saliva, tears, colostrum and gastrointestinal secretions. The molecular stability and effector immune functions make SIgA particularly well suited to provide mucosal protection against pathogens. 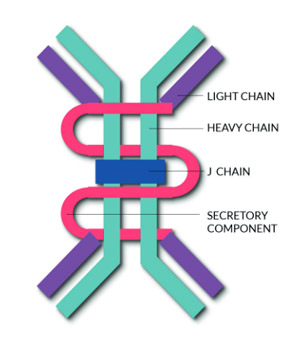 SIgA is produced by plasma cells predominantly as polymeric IgA (pIgA) consisting of two or more monomers linked by the J (joining) chain. pIgA is actively transported by the epithelial polymeric Ig receptor (pIgR) and released into mucosal secretions with a bound secretory component (the extracellular domain of the pIgR) that protects the molecule from proteolytic enzymes.

IgA mediates a variety of protective functions [2, 3]. Luminal SIgA is believed to interfere with pathogen adherence to mucosal epithelial cells, a process called immune exclusion. In addition, IgA appears to have two other defense functions: intracellular neutralization, and virus excretion.
IgA is also found as a monomer in the serum where it may function as a second line of defence by eliminating pathogens that have breached the mucosal surface.
Serum IgA interacts with an Fc receptor called FcαR1 triggering antibody-dependent-cell-mediated cytotoxicity (ADCC).

Due to their specific effector functions, IgA present an interesting therapeutic potential for mucosal protection against virus and bacteria.
Indeed, monoclonal IgA antibodies have been shown to be efficient in protecting against infection by various bacteria and viruses, including HIV-1 [4-6].

Despite this great potential and in contrast to monoclonal antibodies (MAbs) of the IgG isotype, their development as research tools or human therapeutics has been scarce. This is mostly due to the difficulties encountered in producing and purifying biologically active IgA. IgA MAbs can hardly be obtained through the classical hybridoma technique that involves the fusion between murine splenocytes and myeloma cells [7].

As a specialist of the Toll-like receptors (TLRs) and innate immunity, InvivoGen believes that IgA is a new hot topic in this field and therefore is initiating a vast IgA program.
In this regard, we are using an innovative method to generate IgA MAbs which combines hybridoma and recombinant DNA technologies to produce IgA in CHO cells.

Mice are DNA immunized with a plasmid expressing the antigen, and IgG-producing hybridomas are screened using a neutralizing assay based on engineered cell lines (HEK-Blue™ Cells). Variable regions are sequenced from the hybridoma and inserted into a plasmid allowing  for the expression of IgA constant region. IgA antibodies are produced in CHO cells and purified with peptide M affinity chromatography. Peptide M is a synthetic peptide that binds monomeric and dimeric human IgA of both subclasses (IgA1 and IgA2) with high specificity and affinity.
This technique has been utilized to generate series of IgA MAbs that target the extra-cellular TLRs and key cytokines of the innate immune system. These IgA MAbs display potent neutralizing activities and can be used for flow cytometry, and thus represent useful research tools.