The Third International DAMPs and Alarmins Symposium was held in Pittsburgh, USA in 2008. The aim of this meeting was to introduce the emergent understanding of the danger signals also called alarmins or damage associated molecular patterns (DAMPs) by analogy to the pathogen associated molecular patterns (PAMPs). What brought our attention to this meeting is the recent discovery that TLRs play an important role in the immune response initiated by the DAMPs. The major DAMPs are HMGB1 (high mobility group box protein-1), S100A8/S100A9, heat-shock proteins, uric acid and DNA. 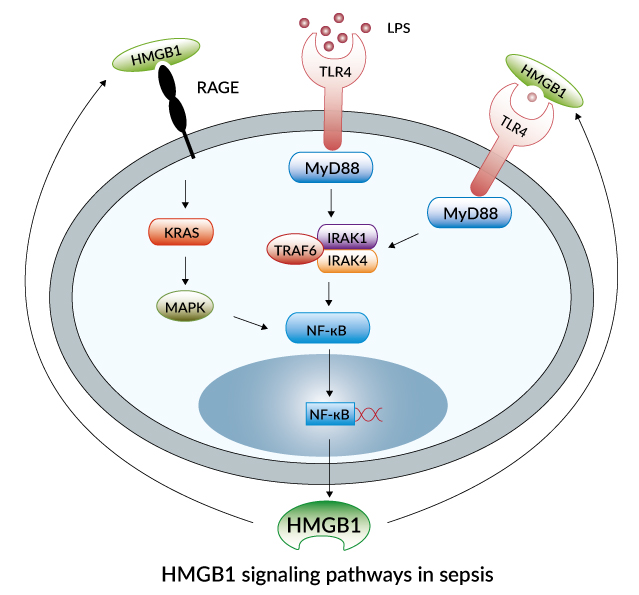 Among these DAMPs, HMGB1 is the most studied as it has been associated with several diseases, including cancer, sepsis, rheumatoid arthritis, stroke and atherosclerosis. HMGB1 is a very abundant nuclear protein expressed in nearly all cell types.
In normal conditions, HMGB1 binds to DNA and bends it to facilitate gene transcription. Under stress conditions, such as injury or infection, HMGB1 is released and promotes inflammation. HMGB1 is passively released by necrotic but not apoptotic death of normal cells and actively secreted by a variety of activated immune and non-immune cells.

Contrary to many reports, HMGB1 is not a pro-inflammatory cytokine per se. HMGB1 by itself has little or no proinflammatory activity but it binds to mediators of inflammation such as LPS, DNA or IL-1β and induces signaling pathways leading to NF-κB activation thereby potentiating inflammatory responses.
Although the signaling pathways elicited by HMGB1 are not fully defined, there is evidence that the triggering occurs via several receptors including RAGE (receptor for advanced glycation end-products), TLR2, TLR4 and TLR9[1]. HMGB1 binds RAGE to regulate migratory responses, but the use of ultrapure recombinant HMGB1 has demonstrated that it does not bind TLR4 (M. Bianchi, oral communication). However, HMGB1 which is released upon LPS-induced TLR4 activation, binds LPS even if present in very small amounts and carries it to TLR4 therefore perpetuating NF-κB activation and inflammation. A similar mechanism was reported for DNA, which is released into the systemic circulation after traumatic shock or injury, and presented to TLR9 by HMGB1[2]. Thus, HMGB1 is not an endogenous ligand for TLRs but an amplifier of TLR-mediated inflammatory responses.

S100A8 (also known as Myeloid-related protein-8, MRP-8) and S100A9 (MRP14) are highly up-regulated in various diseases, such as sepsis, rheumatoid arthritis, inflammatory bowel disease and cancer. These calcium-binding proteins are the most abundant cytoplasmic proteins of neutrophils and monocytes. They are specifically released at sites of inflammation during the activation of phagocytes.

S100A8 and S100A9 form complexes in which S100A8 appears to be the active component, while S100A9 modulates the activity of its binding partner. Although the biological functions of these proteins are not completely understood, they seem to depend on interactions with RAGE and TLR4. Similarly to HMGB1, S100A8-S100A9 complexes amplify the LPS-triggered inflammatory responses of phagocytes. But unlike HMGB1 and according to current knowledge, they can bind to both RAGE and TLR4[3].

The list of DAMPs is rapidly increasing with new additions such as granulysin, eosinophil-derived neurotoxin and serum amyloid A (SAA). A recent report suggests that SAA induces inflammation in a TLR2-dependent manner while another report claims that SAA is an endogenous agonist for TLR4 [4, 5].

It is clear that DAMPs interact with TLRs, however it is less clear whether they bind to them. Recombinant DAMP proteins may contain traces of lipoproteins or endotoxins that may be sufficent to skew the results.
Before this meeting on DAMPs and Alarmins, HMGB1 was thought to be a TLR4 ligand. This highlights how crucial it is to work with DAMP preparations that are totally free of microbial contaminants in order to understand the role of DAMPs in the numerous cellular processes in which they are involved.