TIGIT in the context of immunotherapy

Anti-hTIGIT-hIgG1NQ is a recombinant monoclonal antibody (mAb) featuring a variable region that recognizes human TIGIT and a non-glycosylated constant region of the human IgG1 (hIgG1NQ) isotype.

TIGIT (T cell immunoglobulin and ITIM domain) is an inhibitory checkpoint that has been implicated in tumor immunosurveillance [1]. TIGIT is specifically expressed on immune cells including, natural killer (NK) cells and a range of T cell subsets. TIGIT binds to CD155 (PVR) and CD112 (PVRL2, nectin-2), which are expressed on antigen-presenting cells (APCs), T cells, and a variety of non-hematopoietic cells including tumor cells. Interestingly, TIGIT competes with CD226 (also known as DNAM-1) and CD96 (also known as Tactile) for the same ligands [1,2]. Upon binding to its ligand, phosphorylation of TIGIT inhibits the NF-κB, P13K, and MAPK pathways, and leads to a strong reduction of NK cytotoxicity as well as inhibition of T cell activation, proliferation, and effector functions [2,3].

The blockade of TIGIT is highly favorable in cancer immunotherapy due to a number of reasons including its low expression in peripheral lymphoid organs and high expression in tumor-infiltrating lymphocytes (TILs), the established synergy of TIGIT with other co-inhibitory immune checkpoints, and its ligands being widely expressed on tumor cells [1,2]. The dual blockade of TIGIT and PD-L1 has shown synergistic effects in a murine tumor model, resulting in complete tumor rejection and induced protective memory responses. A similar synergistic effect has been noted with PD-1 and Tim-3 [1,2]. Interestingly, TIGIT’s role in the tumor microenvironment (TME) may also be intertwined with the microbiome. The suppressive function of TIGIT is also exploited by a bacterium commonly found in the TME Fusobacterum nucleatun, to inhibit protective immune responses [4].

Anti-hTIGIT-hIgG1NQ contains an N-glycosylation mutation in the constant region of human IgG1. Potential asparagine (N) glycosylation sites are substituted by glutamine (Q) residues, resulting in the production of a non-glycosylated antibody. Glycosylation of an antibody has no effect on antigen binding but is essential for Fc receptor-mediated activity, and therefore, the effector function of Anti‑hTIGIT‑hIgG1NQ is severely compromised. Anti-hTIGIT-hIgG1NQ was generated by recombinant DNA technology, produced in CHO cells, and purified by affinity chromatography with protein G. 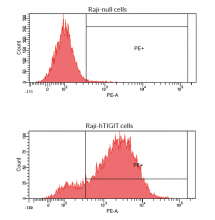 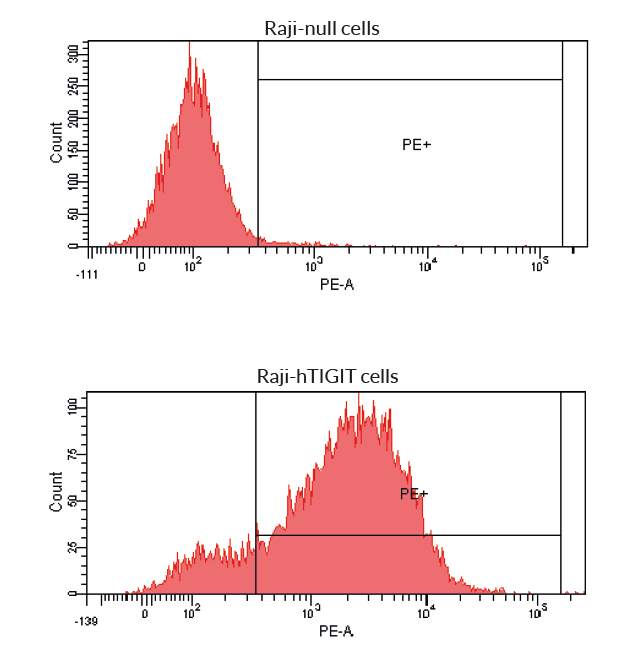 Comparison of ADCC potency for native and engineered anti-human TIGIT antibody isotypes: Raji-hTIGIT cells were incubated with gradient concentrations of Anti-hTIGIT or Anti-β-galactosidase (β-gal) mAbs for 1 hour. Jurkat-Lucia™ NFAT-CD16 effector cells were then co-incubated with target cells for 6 hours. NFAT activation, reflecting the induced ADCC response, was assessed by determining Lucia luciferase activity in the supernatant using QUANTI-Luc™. Percentages of the maximal response normalized to the IgG1 isotype are shown.

Applications: Anti-hTIGIT-hIgG1NQ binds and blocks ligand activation of TIGIT found on the surface of cells

Product is shipped at room temperature.