Recombinant mouse mAb against murine CD4 for in vivo use 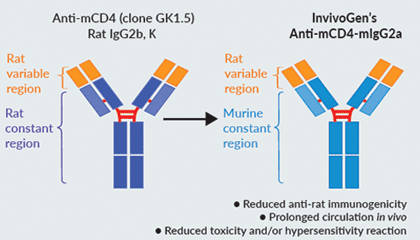 CD4 is a transmembrane protein primarily expressed on most thymocytes, and highly expressed by the peripheral mature CD4+ T cell population, including T helper (Th) and regulatory T (Treg) cells [3]. Other immune cells, such as monocytes and macrophages also express CD4, albeit to 10- to 20-fold fewer levels compared to T cells [4].

The anti-mCD4 GK1.5 mAb is commonly used for in vivo depletion of the CD4+ T cell population to study the role of this T cell subset in various immune responses, including anti-pathogenic responses, auto-immunity, cancer, or transplantation [5]. Depending on the nature of the experiment, extended treatment schedules (up to several months) may be required. Upon repeated injection of a xenogeneic mAb, mice produce anti–species antibodies, causing the removal of the administered mAb from circulation, thereby considerably reducing treatment efficacy. Moreover, this immunogenicity can lead to fatal hypersensitivity reactions [5-7] which can be reduced by mAb murinization [8].
Anti-mCD4-mIgG2a is provided in an InvivoFit™ grade, a high-quality standard specifically adapted to in vivo studies.


Anti-mCD4-mIgG2a InvivoFit™ is produced in Chinese hamster ovary (CHO) cells and purified by affinity chromatography with protein A. The specific binding of this mAb to cell surface mCD4 and its in vivo depleting function have been confirmed (see Figures). 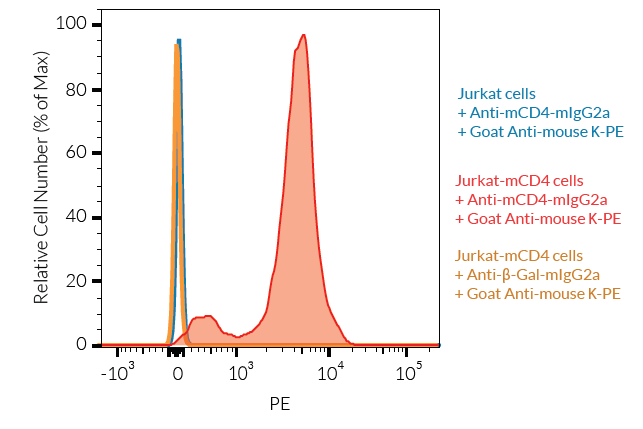 Cell surface staining of murine CD4 using Anti-mCD4-mIgG2a InvivoFit™ mAb.
~5x105 Jurkat (parental) or Jurkat-mCD4 cells were incubated with 2 μg of Anti‑mCD4‑mIgG2a InvivoFit™ mAb or an isotype control for 1h at 4°C. Cells were then washed and incubated with 0.25 μg of goat anti-mouse κ-light chain coupled to PE for 1h at 4°C. Cell surface staining was analyzed by flow cytometry. 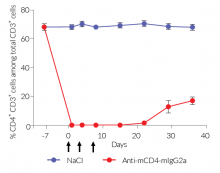 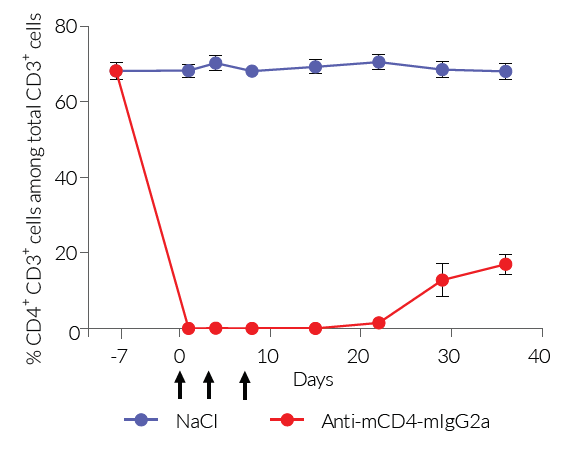 Analysis of CD4+ T cell population in mice peripheral blood upon injection of Anti-mCD4-mIgG2a InvivoFit™ mAb.
Blood samples (20 μl) from SWR/J mice aged 10 weeks were harvested 1 week prior to a series of intraperitoneal (IP) injections with the depleting Anti‑mCD4‑mIgG2a InvivoFit™ mAb (200 μg) or NaCl (control), and 24h after each IP injection. IP injections were performed at day 0, +3, and +7 (arrows). Thereafter, blood samples were harvested once a week. To assess the kinetics of the in vivo depletion of CD4+ T cells, peripheral blood was stained with the following conjugated antibodies: Anti-CD45-Pe-Cy7 (clone 30-F11), Anti-CD3e-PE (clone 145-2C11), Anti-CD4-FITC (clone RMA-4), and Anti-CD8-APC (clone H35-17.2) according to standard procedures. Cell surface staining was analyzed by flow cytometry. Data are represented as the frequency of CD4+ T cells among the total CD3+ T cell population.

Purity: Purified by affinity chromatography with protein A

This product is available in two pack sizes:

InvivoFit™ is a high-quality standard specifically adapted for in vivo studies. InvivoFit™ products are filter-sterilized (0.2 µm) and filled under strict aseptic conditions in a clean room. The level of bacterial contaminants (endotoxins and lipoproteins) in each lot is verified using a LAL assay and a TLR2 and TLR4 reporter assay.

The cluster of differentiation 4 (CD4) receptor (formerly named L3T4, or T4) is a 55 kDa transmembrane protein primarily expressed on most thymocytes, and highly expressed by the peripheral mature CD4+ T cell population, including T helper (Th) and regulatory T (Treg) cells [1]. Other immune cells, such as monocytes and macrophages also express CD4, albeit to 10- to 20-fold fewer levels compared to T cells [2]. Besides its role in the positive selection and development of CD4+ T cells, the CD4 receptor plays a critical role during their activation. It fulfills an intercellular adhesion function by interacting with the α2 or β2 domain of MHC class II molecules, thereby stabilizing the interaction between the TCR on the T cell and the MHC-peptide complex on the antigen-presenting cell [3]. Upon antigen recognition, the proximity association of CD4 and the TCR/CD3 complex on T cells triggers downstream intracellular signaling and participates in the T helper differentiation [1].