Below are the data obtained with the following anti-SARS-CoV2 Spike antibodies featuring a mouse IgG2a constant region: 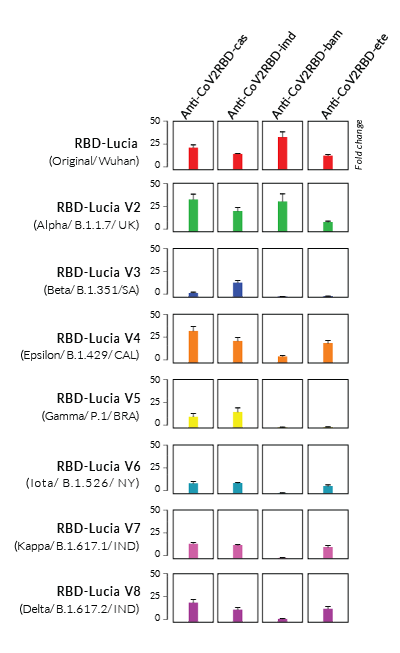 The binding capacity of InvivoGen's anti-SARS-CoV2RBD mAbs to a set of Spike variants has been validated using a Lucia luciferase-based ELISA.
Anti-murine IgG F(ab’)2 fragment (2 µg/ml) was coated on an ELISA plate overnight. Anti-CoV2RBD-cas-mIgG2a, Anti-CoV2RBD-imd-mIgG2a, Anti-CoV2RBD-bam-mIgG2a, Anti-CoV2RBD-ete-mIgG2a along with RBD-Lucia proteins (original and V2 to V8; 1 µg/ml) were added and incubated for 2 hours at room temperature. After washing (3x times), binding affinity was assessed by measuring the activity of Lucia luciferase in the supernatant using QUANTI-Luc™. Data are shown as a fold change over no antibody.

InvivoGen's RBD-Lucia proteins allow the testing of anti-Spike antibodies in the sera of COVID-19 patients or vaccinees.
Protein A beads, vaccinee serum, and RBD-Lucia proteins were co-incubated for 2 hours at room temperature. RBD-Lucia-antibody complexes bound to Protein A beads were then purified and extensively washed before quantification using  QUANTI-Luc™. Representative data are shown as a fold change over no serum. 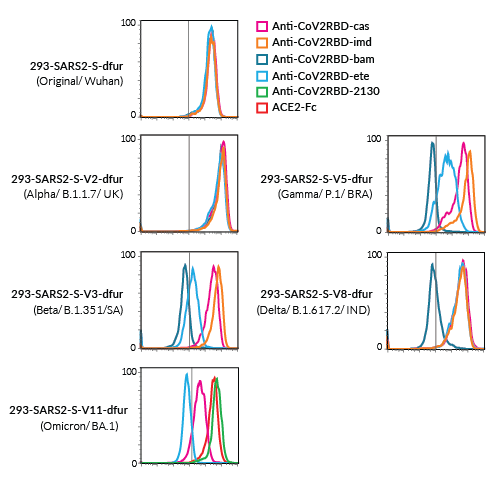