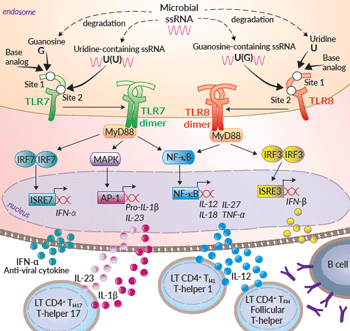 Toll-like receptors (TLRs) play a pivotal role in the initiation of anti-infectious immune responses. Distinct pathogen-associated molecular patterns (PAMPs) are recognized by different TLRs, at the cell surface or in endosomes. TLR7 and TLR8 are endosomal receptors that share structural homology and sense viral single stranded (ss) RNA as well as synthetic base analogs. However, there are functional differences between these two TLRs.

The endosomal distribution of TLR7 and TLR8 allows them to scan for the presence of microbial RNA in the phagocytic cargo. Their activation leads to NF-κB-, AP1- and IRF-mediated production of type I IFNs (IFN-α/β) and pro-inflammatory cytokines1. Structural analyses have revealed that both TLR7 and TLR8 possess two binding sites which do not share the same specificities. Site 1 is highly conserved between TLR7 and TLR8 and binds nucleosides (guanosine (G) for TLR7 and uridine (U) for TLR8) or base analogs. The ligand preference for TLR7 and TLR8 is explained by the presence of specific residues in Site 1. Site 2 is less conserved and binds ssRNA with U(U) and U(G) motifs, respectively2,3. Of note, Site 1 occupancy allows the receptor dimerization and signaling with ad hoc ligand concentration. ssRNA-binding to Site 2 is not sufficient for the formation of a signaling competent TLR dimer but it strongly enhances the binding affinity of Site 12,3. Thus, TLR7 and TLR8 appear to sense distinct RNA-degradation products rather than full-length ssRNAs3.

TLR8 has been less studied than TLR7 as it was initially thought to be non-functional in mice4. Of note, this does not hold true when using TL8-506, an analog of the synthetic agonist VX-2337. Further, TLR13 has been suggested as a murine TLR8 homolog5. Thus, findings regarding mouse TLR7 and TLR8 are not transposable to their human counterparts4,6. However, there is a renewed interest in TLR8 supported by the structural analyses, along with a report describing human TLR8 as a key sensor of bacterial viability through the recognition of bacterial RNA7.

TLR7 and TLR8 exhibit different expression patterns. TLR7 is essentially expressed by plasmacytoid dendritic cells (pDCs) but is also found in B cells and myeloid cells1. TLR8 is absent from pDCs and B cells and is highly expressed by myeloid cells1. This suggests that TLR7 and TLR8 have evolved to mediate distinct immune responses upon microbial encounters. Viral infections trigger TLR7-mediated production of IFN-α in pDCs1,6. However, in monocytes, TLR7 and TLR8 activation induce the expression of TH17- and TH1-skewing cytokines, IL-1β and IL-12, respectively8. Upon bacterial infection, TLR7 drives IFN-α production by pDCs, but its role in myeloid cells remains obscure6. On the other hand, TLR8 seems to be the "best-fit" sensor for bacterial RNA in myeloid cells6,7.

There is converging evidence for TLR8 to be the missing link between empirical use of live attenuated microbes in vaccines and the known necessity for TH1- and TFH-driven humoral immunity to reach superior vaccine efficiencies. Live bacteria or bacterial RNA, but not dead bacteria, induce the TLR8-dependent production of IL-12 by human monocytes, thereby promoting TFH differentiation6. Moreover, epidemiological analyses indicate that the gain-of-function of human TLR8 through single nucleotide polymorphism is linked to better protective immunity in response to a live bacteria vaccine (i.e. BCG)7. Lastly, TLR8 seems to play a unique role in neonatal immunity as human neonatal phagocytes are only responsive to TLR8 ligands9.

A better comprehension of the functional differences between TLR7 and TLR8 should allow the development of more potent, specific, and less toxic molecules as stand-alone drugs or adjuvants for the treatment of inflammatory, autoimmune and cancerous diseases.