TLR9 Recognition and Signaling: An Update 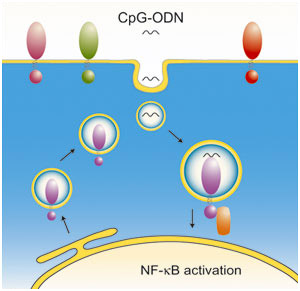 Accumulating evidence suggests that CpG DNA and TLR9 interact in intracellular compartments. For example, lipofection increases the stimulatory activity of CpG DNA and chloroquine, an inhibitor of endosomal acidification, prevents TLR9 signaling. Recent studies show that TLR9 is expressed in the ER of resting cells in contrast to most TLRs that are located on the plasma membrane[1]. As CpG DNA is internalized through endocytosis, TLR9 relocates to the entry site of CpG DNA. The accumulation of CpG DNA and TLR9 in the endosomes leads to their co-localization within the same vesicles, and induces the recruitment of MyD88 to initiate signaling[2].

TLR9 recognizes specifically CpG DNA that is unmethylated and single stranded (ss). Methylation of the cytosine within the CpG motif strongly reduces the affinity of TLR9[3,4]. In addition, double stranded (ds) CpG DNA is a weak stimulator of TLR9 compared to its ss counterpart[3]. This observation seems to contradict the findings that genomic E. coli DNA activates TLR9. We have found that E. coli DNA induces a poor response in TLR9-transfected HEK293 cells. In contrast, we observed that short ss fragments of E. coli DNA, generated by sonication and denaturation, were able to activate TLR9. A possible explanation is that upon endocytosis, ds CpG DNA is degraded into small ss CpG motifs that can activate TLR9. CpG DNA containing a phosphodiester (PD) backbone interact with TLR9 in a CpG sequence specific manner. In contrast, phosphorothioate (PTO)-protected ODNs bind to TLR9 in a CpG-independent manner[2, 3], but show a CpG-dependent stimulatory activity[3]. This difference between PD and PTO backbones suggests that the structure of the ODN influences the binding to TLR9 and the subsequent cellular activation.

Three types of CpG ODNs have been identified based on their distinct activity on plasmacytoid dendritic cells: type A (or D), B (or K) and C. Unlike CpG ODN-B, CpG ODN-A induces only modest NF-κB activation in B cells or HEK293 cells expressing TLR9, suggesting that a distinct cofactor may be required for activation [2, 5].

Clearly, there is still much to learn before we fully understand CpG DNA-TLR9 interactions. This understanding is the key to design novel therapeutic agents for the treatment of autoimmune diseases or cancers.