Increased serum levels of these DAMPs have been associated with many inflammatory diseases, including sepsis, arthritis, atherosclerosis, lupus, Crohn’s disease and cancer. Therapeutic strategies are being developed to modulate the expression of these DAMPs for the treatment of these diseases. 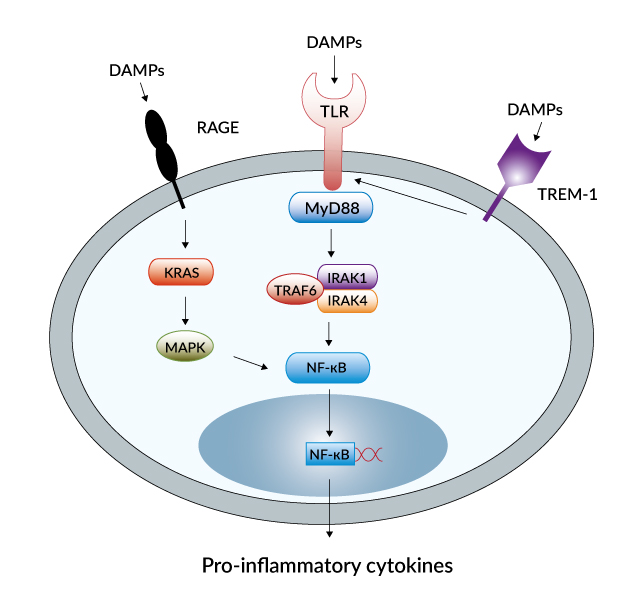 High mobility group box-1 (HMGB1) is a non-histone nuclear protein that has dual function. In normal conditions, HMGB1 binds to DNA and bends it to facilitate gene transcription. Under stress conditions, such as injury or infection, HMGB1 is released and promotes inflammation.
HMGB1 is passively released by necrotic but not apoptotic death of normal cells and actively secreted by a variety of activated immune and non-immune cells.
Contrary to many reports, HMGB1 is not a pro-inflammatory cytokine per se [1]. HMGB1 by itself has little or no pro-inflammatory activity but it binds to mediators of inflammation such as LPS, DNA or IL-1β and induces signaling pathways leading to NF-κB activation thereby potentiating inflammatory responses. Although the signaling pathways elicited by HMGB1 are not fully defined, there is evidence that the triggering occurs via several receptors including the multiligand receptor for advanced glycation end products (RAGE), TLR2, and TLR4[2].

S100A8 (MRP8, calgranulin A) and S100A9 (MRP14, calgranulin B) are calcium-binding proteins expressed in cells of myeloid origin [3]. As intracellular calcium-binding molecules, S100A8 and S100A9 have a role in migration and cytoskeletal metabolism. Cell damage or activation of phagocytes triggers their release into the extracellular space where they become danger signals that activate immune cells and vascular endothelium. S100A8 and S100A9 seem to interact with RAGE4 and TLRs [5].

Serum amyloid A (SAA), an acute-phase protein, is produced predominantly by hepatocytes in response to injury, infection, and inflammation. SAA is chemotactic for neutrophils and induces the production of proinflammatory cytokines NO. The downstream signaling pathways triggered by SAA include ERK and p38 activation. Several receptors appear to mediate the effect of SAA, including FPRL1, RAGE, TLR2 and TLR4 [6, 7].

Receptor for advanced glycation endproducts (RAGE) is a multiligand receptor of the immunoglobulin superfamily expressed on macrophages, neurons, endothelial cells and a variety of tumor cells. RAGE interacts with various ligands, including AGE (advanced glycation endproducts), HMGB1, S100 proteins and β-amyloids [8]. Stimulation of RAGE induces the activation of NF-κB and the MAPKs, Erk1/2 and p38. RAGE can both initiate and perpetuate the inflammatory response [9].

Some DAMPs can engage TLRs to induce and amplify the inflammatory response. TLR2 and TLR4 signaling have been shown to mediate NF-κB activation initiated by HMGB1 [10], S100A8 [5] and SAA [6,7]. Different signaling pathways are involved that may cross-talk at several levels, but all culminate in the activation of NF-κB [9].

Mincle, a transmembrane C-type lectin receptor (CLR), is also involved in mediating inflammatory responses to necrotic cells [11]. Mincle was originally identified as a LPS-inducible protein in macrophages [12] and has been shown to stimulate inflammatory responses to Candida albicans [13]. Mincle associates with the Fc receptor common g-chain leading to intracellular signaling through Syk and CARD9. Mincle recognizes a soluble factor released by necrotic cells identified as spliceosome-associated protein 130 (SAP130).
Stimulation of macrophages with purified SAP130 was shown to induce inflammatory responses, suggesting that this protein acts as a DAMP [11].

Triggering receptor expressed on myeloid cells 1 (TREM-1) is a new member of the immunoglobulin superfamily present on monocytes and neutrophils. TREM-1 is a positive regulator of inflammatory responses [14]. It has been shown to synergize with TLR4 to mediate the effects of HMGB1 and another DAMP, HSP70, from necrotic cells [15].